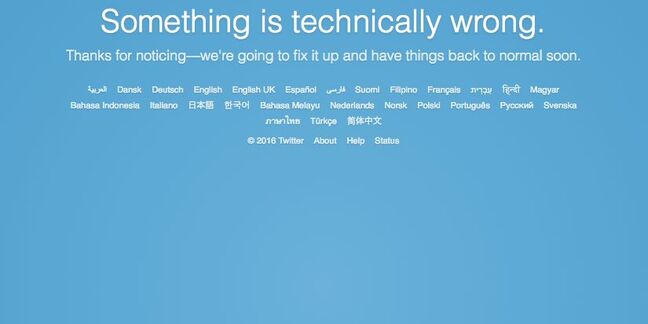 Microbabble platform Twitter is suffering a global outage due to an unknown service disruption.

Twitter has been hobbled by a handful of issues today, with its web, mobile, and API service dropping offline from just after 8:00am this morning.

The tiny bird claimed to have reported the outage by tweeting from their @support account on Twitter, which nobody was able to see due as Twitter was down. The statement was subsequently passed on to the media, and says: "Some users are currently experiencing problems accessing Twitter. We are aware of the issue and are working towards a resolution."

Tuesday morning's outage follows similar, if shorter, down periods on Monday night and on Friday afternoon, which only bothered services for 10 minute periods.

The Register has contacted Twitter for an explanation and will update this article if and when we receive a reply. ®