Is that light at the end of AMD's dark tunnel, or God sparking up a cig?

Analysis AMD claims there is light at the end of its tunnel, but the beleaguered chip maker is having a hard time pointing it out.

The Intel rival's share price was down 6.15 per cent to US$1.83 in after-hours trading on Tuesday; investors quickly moved after AMD published the financial figures for its final quarter of 2015, and for the full year. Suffice to say, the numbers aren't good. 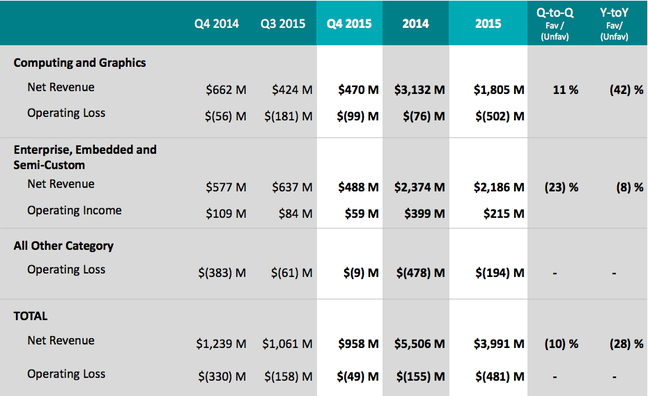 Breakdown ... How AMD's numbers look across its divisions
(click to enlarge)

So not only did AMD's core market of PC processors and graphics chip take a dive – not entirely unexpected – its other side – console chips, embedded system-on-chips and server-grade hardware – dipped as well. PC CPUs and graphics chips made an operating loss of $502m in 2015, versus a $76m loss in 2014, on revenues of $1.8bn. Enterprise, embedded and games console chips (aka custom semiconductors) brought in an operating income of $215m, down 46 per cent, on sales of $2.18bn.

Looking carefully, we see that the non-PC side overtook the PC side in terms of revenue from 2014 to 2015. You can blame a collapsing desktop market, and a drop in AMD's average selling price for its processors, on that, we're told.

AMD CEO Lisa Su told investors and analysts on a conference call that more than 50 million Sony and Microsoft consoles have shipped using parts designed by AMD: these chip designs had a record year in terms of sales in 2015, but were offset by a drop in royalties from console makers. This dip in licensing fees was expected, as the lower rate was written into the supply contracts AMD has had with the console giants.

AMD expects strong console chip sales in the second half of the year, mainly in the run up to Christmas; its designs feature in the Sony Playstation 4 and the Microsoft Xbox One. AMD has also put it about that it has a third design win, and it's rumored that its graphics chip blueprints will be used in the forthcoming Nintendo NX. AMD shifted 15 per cent more console GPUs in the second half of 2015 than in the first six months, and so it expects the first half of 2016 to be a little quiet, too.

Su admitted AMD's ARM server chips – it just started shipping Seattle – were developing "slower than expected," and that while ARM-based processors were still interesting to AMD, its focus will be on x86. Seattle was announced in January 2014, and officially started shipping this month – a two-year launch, in effect. El Reg has heard whispers of disquiet among some of AMD's x86 engineers over the need for 64-bit ARMv8 chips in the data center; for now, the ARM-powered AMD Opterons are an ongoing experiment.

"x86 has a lot of momentum, and we've put quite a bit of effort into x86," Su told analysts. "ARM has a lot of specific areas where it can be a contributor in servers ... it's something to watch for the medium term."

She also said AMD had made "quite a bit of progress" in its distribution channel, especially in the second half of the year. In the final quarter of 2015, its channel team did well in North America, and in Europe, we're told, although there was "degradation" in China. The channel is important for AMD because it had to write down unsold inventory by $65m in the third quarter of this year. We're told AMD finished 2015 with less inventory than it had at the end of 2014.

All sizzle and ... where's the steak?

The trouble AMD has at the moment is convincing people that it has a concrete future. We could write nice things about mini-Chipzilla's architectures all day, but people are voting with their wallets and stock portfolios. It's a tough life being second to Intel and Nvidia at the moment.

Despite estimating that revenues from its first quarter of 2016 will be 11 to 17 per cent lower than the year-ago quarter, it's overall predicting growth over the next 12 months. To do this, it has to nail all of its promises: 14nm FinFET Polaris GPUs by mid-2016; Zen x86 cores for PCs this year and in servers in 2017; companies buying FirePro GPUs; gamers buying virtual-reality chipsets; and the third custom semi win taking off.

Su said a number of server makers and cloud providers are test-driving Zen-powered systems, although they won't launch until next year. 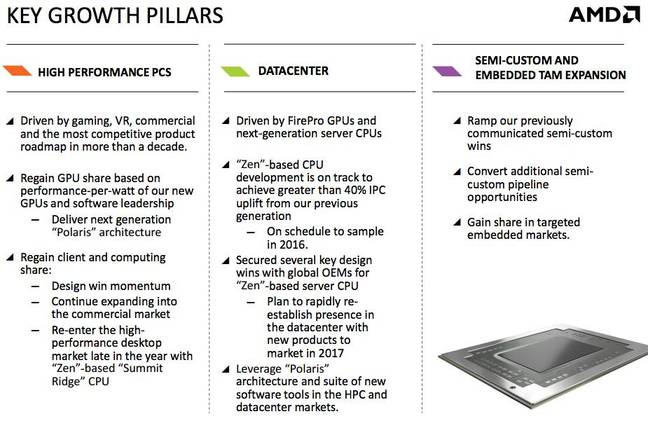 All this hope and promise was extinguished by uneasy analysts hoping for a six per cent estimated revenue fall in Q1 2016, not the aforementioned double-digit dip. China, reluctant to spend too much money so far this year, is one cause for this expected drop in sales. Another cause is the fact that most people buy consoles before Christmas, not after, and consoles are helping to prop up AMD.

"We are projecting full year revenue growth, so we do need significant growth going into the second half of the year," Su admitted after several questions on the matter.

AMD still has $785m in the bank – more than the minimum of $600m it thinks it needs to continue day to day – and has cut its debt interest expenses by 10 per cent. ®

Need a cold shower? This is xNix like Windows users imagine it still is
OSes10 Aug 2022 | 7