Review Red Hat closed 2015 with an update to Red Hat Enterprise Linux (RHEL) that bumps the venerable distro to version 7.2. That might sound innocuous but don't let the minor version number fool you, with huge leaps in software versions, a newfound love of all things cloud container and systemd updates under the hood, this is one of the single biggest updates Red Hat has ever pushed out.

A lot of what's new revolves around the server version, which is no doubt the most popular use of RHEL, especially if you factor in downstream projects like CentOS.

That said, RHEL makes a compelling workstation, particularly if you like GNOME's fallback mode, which RHEL uses to make the desktop feel a bit more like GNOME 2.x. This release has some big updates for GNOME Shell and the standard GNOME app suite.

Although there are some updates for desktop users, Red Hat has clearly been focused on the server, and more specifically, RHEL as a platform for containerized application deployment.

RHEL 7.2 has enough updates to container-related software it almost feels like there's nothing else left. There's a huge upgrade for the Docker engine, Google's Kubernetes container management system, Red Hat's Cockpit server management tools and Atomic Host, which is the container-optimized variant of RHEL 7.2. 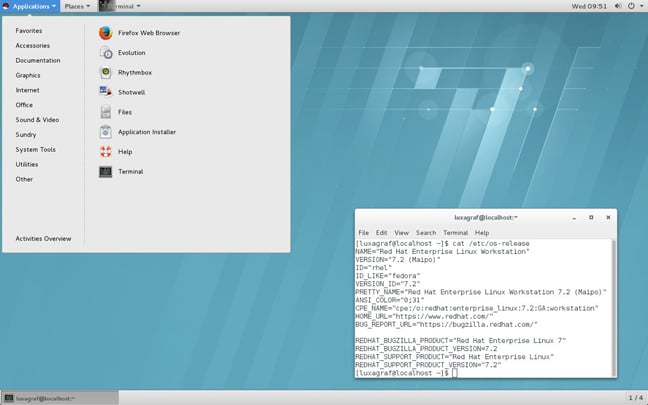 The default GNOME desktop in RHEL 7.2

Curiously though for a distro that built its reputation on rock-solid software and support, nearly all those container projects and tools are beta software. Indeed these same tools are touted in the bleeding edge of Fedora as well. To be fair, RHEL sticks back a couple of versions from what you'll get in Fedora, but certainly, when it comes to containers at least, RHEL no longer feels as out of date as it once did.

While it might be a bit different than what you would have once expected from RHEL, the move to more modern software, fully stable or not, makes sense - at this point without support for container systems it's unlikely anyone would take RHEL seriously as a server platform.

The biggest news on the security front is support for OpenSCAP. The Security Content Automation Protocol (SCAP) is a set of shared security best practices that can be used to analyze and set up systems according to specific security guidelines. RHEL 7.2 features a new OpenSCAP plugin for the Anaconda installer.

As part of the installation process Anaconda now has an option to install a security policy right from the start. By default nothing is applied, but one click will allow you to install everything from PCI-DDSv3 to Red Hat's own profile for Certified Cloud Providers.

Anything that makes increased security easier is almost always a win for users and you'd be hard pressed to find an easier security policy setup than this.

This release isn't just notable for sysadmin goodies, security and containers though. It’s the first time in the history of RHEL that the distro has done a full-scale desktop update in a point release. Not just any desktop update either, GNOME leaps from 3.8 (the default in 7.0) all the way to GNOME 3.14.

That means a whole host of new features, a revamped theme, all the system status updates, new applications like Weather and Maps (not installed by default, but available in the repos), as well as the new GNOME Software app and some other goodies that Fedora users have enjoyed for the last year or so. 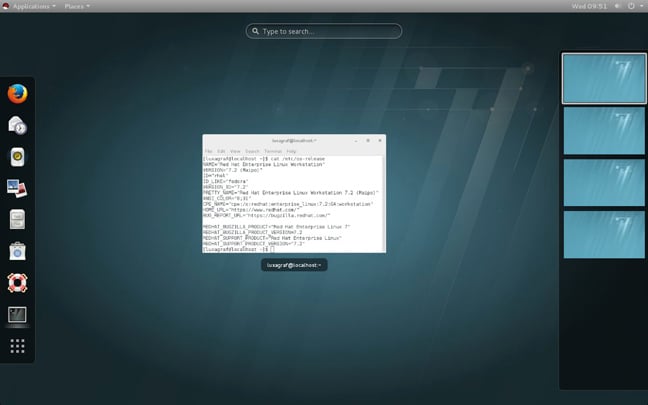 There's also quite a bit of new hardware support that comes with the move from 3.8 to 3.14, including all the HiDPI support GNOME has been working on for some time, along with improved touch and gesture support for track pads.

RHEL takes a somewhat different approach to GNOME Shell, in that it opts to inject an old GNOME 2-style Applications and Places menus into the top bar. These co-exist with the Shell interface and provide a way to get most of what you want to do done without actually using the Shell much at all.

Occasionally the menus get in the way - for example, the open application's menu gets pushed over to the right, which looks out of place - but for the most part it makes a nice compromise between the old and new GNOME desktop interfaces.

Perhaps the most exciting thing about this big leap in GNOME version is it's not just part of this release. The change is part of a policy change that's designed to make the RHEL Workstation more attractive to those who've been looking for a LTS version of Fedora.

In other words, the Workstation variant will continue to get major updates more frequently, making it a more compelling "Fedora LTS". True, RHEL Workstation isn't free as in beer like Fedora, but if you've been looking for a slightly more stable version of Fedora with great support RHEL 7.2 delivers.

In fact RHEL delivers by just about any count. It's a solid release with modern options for the cloud-obsessed and those just looking for a stable, but relatively up-to-date desktop - no small achievement. And if you don't want to pay for the support, there's always CentOS 7.2, which should be along any day now. ®