Five technologies you shouldn't bother looking out for in 2016

Something for the Weekend, Sir? Welcome to the future! The skies are full of flying cars, the waters are full of personal submarines and our digital wallets are full of 57 varieties of mutually incompatible blockchain-based monetary currency.

Food is consumed in the form of nutrition pills. The outdoor temperature is determined by Weather Control in Berlin. You’re wearing clothes made of recycled plastic bags: that’s right, the Superdry brand still exists!

Ah, you’ve noticed all the chrome. Nice and shiny and futuristic, isn’t it? Everything is chrome in the future!

As usual, the recent turn of the year was accompanied by a chromed sackful of crazy predictions in tech for 2016. Now that the shiny mirror dust has settled, it’s my turn.

Regular readers will be familiar with the fact that I have no original ideas of my own, so I’m not going to write a list of computing trends for the coming year but to take the piss out of other people’s. Here goes: my list of things that definitely won’t happen in 2016, starting with crushing inevitability...

Oh dear. Oh dear oh dear oh dear. This claim about the Internet of Things has appeared on new-year prediction lists for the last five years and I confidently predict that it will continue to do so for another five at least. Maybe ten.

Despite repeated confident annual forecasts that “this will be the year of consumer IoT”, all we’ve got to show for it are apps that let me turn on the central heating when I’m not at home. Useful, that. Perhaps they could develop the idea further to include an app for switching on the light when I’m not in a room or to flush the toilet when no one has used it.

IoT simply can’t possibly go mainstream until cross-platform interconnectivity, data security and air noise issues are solved – and so far, no IoT product manufacturer seems remotely interested in doing anything about them. Noise is an engineering problem, a mere detail, as far as they are concerned, while security is considered by manufacturers to be an annoyance that they hope will go away if only we’d all just shut up about it.

As for compatibility with IoT offerings from other manufacturers, well duh. What commercial business was ever interested in such a daft thing? Lock-in and proprietary tech are where the profits lie. Open systems are for academics and communists.

2. Wearable tech will find a purpose

Hang on, aren’t wearables the same as IoT? Not at all: IoT is an emerging technology. A wearable, on the other hand, is just an existing gadget that just happens to be strapped clumsily onto one of your limbs or affixed ridiculously to your face.

While IoT might, in theory, attempt to do something practical and useful, a wearable does things such as keeping a running tally of how many arseholes you have during the course of the day.

This might seem delightful at first to a certain kind of consumer – one who has never seen an electric light before, perhaps – but I can’t see it as a consumer-friendly segment that can maintain the interest of anyone but the easily fooled, such as the type of person that invests millions in tech startups.

Not long ago, I grabbed a few words with a busy colleague in a corridor and he kept nervously taking his iPhone out of his pocket to check the time. A couple of minutes later, his ringtone began playing, whereupon he checked his wristwatch to find out who was calling.

That’s wearable tech for you.

Look, see! I’ve just invented a new wearable device! I call it FaceWatch. Can I have some investment cash, please, Mr Shit-for-brains? Thank you! 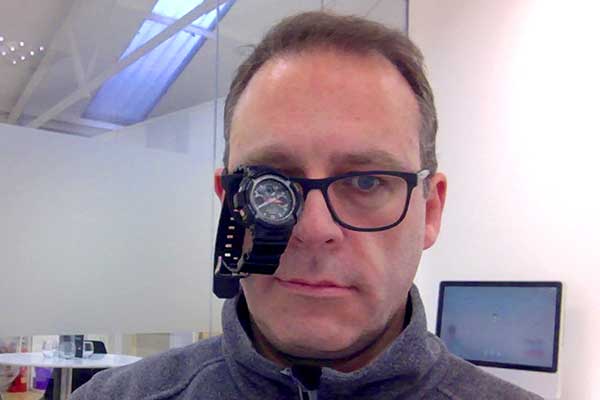 FaceWatch by Dabbsy(TM). This has never been done before. I can't think why.

Yeah, right. Just like they rolled out 4G last year, or the year before, or whenever it was supposed to happen.

Sure, some of you reading this will be enjoying 4G. I have even met some people who have access to it, although I note they are all IT journalists who have been supplied with the latest smartphones, SIMs and testing accounts for free by press relations.

4G is like a politician’s promise: they tell you that you’ve got what you haven’t, and for proof they show you someone else has it instead.

Despite my many enquiries, no phone company is willing to provide me with a 4G upgrade without raising my monthly bill from "affordable" to "insanity" in a single jump.

Besides, I have my doubts as to whether it even works. As it is, standard coverage in my region (a remote backwater known as “London, England”) struggles to maintain the flimsiest of 3G connections, often failing down to Edge or GPRS if I’m reckless enough to step into a building.

Oh please. I’ve been writing about VR and its “amazing potential applications” since the early 1990s, with barely an inch of practical progress in all that time.

Back then, a VR headset was a vast, heavy device that was about as convenient and comfortable to wear as putting on a motorbike crash-helmet back to front. And today, it’s exactly the same, except with streamlined edges – in case you want to wear it while riding a motorbike back to front, I suppose – and a pitiful design attempt at Daft Punk chic.

While I admit there remains a possibility of selling cheaper VR headsets to hardcore gamers, the important applications in medical and engineering industries seem to still use the kind of 3D graphics that would be shamed by a 1980s Dire Straits video.

Informed sources tell me that VR and augmented reality will be the next big thing in cinema. So instead of charging me £5 for a pair of shitty plastic glasses that tear chunks from my nose, my local picture house can sting me for £4,000 to suffer the next repetitive, derivative, over-rated Pixar bore-fest.

I can, however, agree on one thing: I fully expect consumer VR to become every bit as successful as 3D televisions.

This has been a new-year favourite in the business and tech press since the early 1980s. In 2012, Harvard Business Review even reckoned that to be a data scientist is “the sexiest job of the 21st century”.

Why is it that no-one has spotted that the people writing this are people who earn a living writing about data science for a readership made up of data scientists? I may as well claim that Register readers are smart and wealthy and likely to spank their way through a dozen partners a year.

Wishful thinking, right? What sad, lonely bastard wouldn’t want to be identified in this way?

Come on, guys, look around at your colleagues and tell me honestly whether you think they’re hot. Does the fact that they dress like your Dad, clip ballpoint pens in their top pocket and smell of unwashed sleeping bags make them sexier than, say, a racing driver, a top-gun pilot or a lingerie model?

Worse, what do you imagine they’re thinking about you?

Alistair Dabbs is a freelance technology tart, juggling IT journalism, editorial training and digital publishing. He predicts that the current run of celebrity deaths will slow down by the end of the month but will repeat itself around New Year 2017. In the meantime, as a means of hastening nature along, he plans to record a tribute album of Kanye West songs. On the ukulele.