Squeeze the banana to log into this office Wi-Fi

In some offices, you have to ask around for the Wi-Fi password, or find it written down on a bit of paper. In others, you do it by poking a banana.

Danish network engineer Stefan Milo constructed his fruity authentication system by wiring a piece of fruit to a Makey Makey board and a Raspberry Pi mounted on acrylic glass. The entire setup cost under $100, and creates a novel way for guests to obtain one-time access codes.

Milo told El Reg that he built the system as an alternative to a ticket-based system that physically prints a code unique for each visitor. With that system, guests go to the reception desk, get a slip of paper with their code on it, and then enter that number into a Wi-Fi captive portal to gain access to the network.

"When you go to $corp, and the receptionist hands you a small piece of paper that someone printed out on an A4, and then spent time on cutting out into small pieces, I cringe," he explained.

Instead, Milo spent a weekend at home developing his automated ticket dispenser. The (relatively) simple setup runs a bash shell script on the Raspberry Pi that generates a unique guest key on command and displays the code on an attached TFT display. The script is triggered via the Makey Makey board, which is told to alert the Pi whenever a voltage drop is detected in the attached banana. 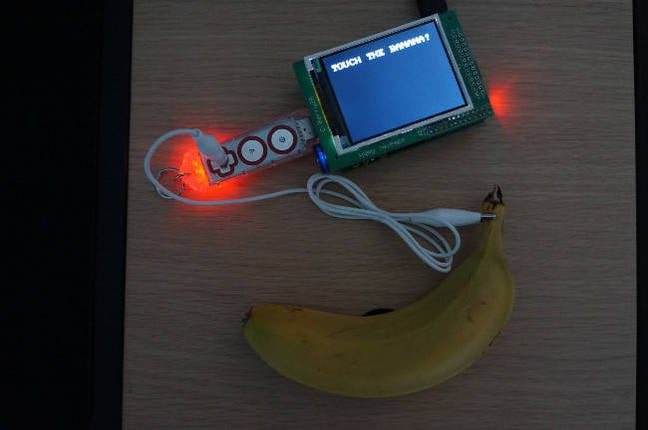 In practice, the guest presses the banana, causing a voltage drop in the fruit, which triggers a spacebar keypress from the Makey Makey, which then activates the Raspberry Pi to pull a key from its voucher file and show it on the display. The user then enters that key as their guest login credential.

In its current habitat, Milo said the banana setup only serves about five guests a week, but with a simple expansion of the voucher file (and regular banana changes), the setup could run for years on end, accommodating thousands of office guests. 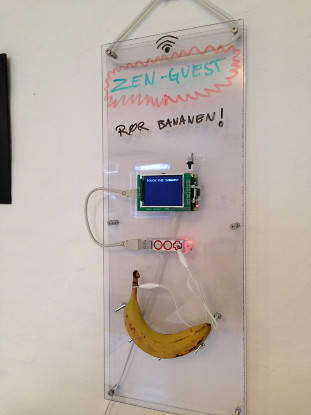 Milo said that, despite some initial skepticism, the banana setup has been a hit with guests, generating smiles and disbelief at the prospect of having to poke a piece of fruit in order to get network access.

"The old sysadmin that only cares about his aquarium said it was the most stupid idea ever," he mused. "But when the banana was up on the wall, he was the first one to touch it."

Given the simplicity of the setup and low equipment costs, Milo said his system would, in practice, be very easy to reproduce. Fabricating the entire setup, including the acrylic case, took around 8-10 hours and Milo said the script running the Raspberry Pi occupies all of about 20 lines of code.

While his proof-of-concept may not be a technical marvel, Milo is proud of the way his unique portal is able to get a reaction from those who come in contact with it.

"It's important to me that tech is useful," he said, "but if you can put a smile on peoples' face while they're using it, then I'm a happy packet-pusher." ®