Aegean wall lizards have demonstrated the impressive ability to hide from avian predators by camouflaging themselves against rocks "that best match the colour of their backs".

On the look-out for a matching rock: the Aegean wall lizard

That's according to Kate Marshall from the University of Cambridge’s Department of Zoology, who with her field assistant Kate Philpot, studied the animal's bird-dodging behaviour in the wild. Aegean wall lizards in the Greek islands "showed better colour matching against their own chosen rock backgrounds than against other lizards’ rock backgrounds, as perceived by avian predators such as the crows and raptors abundant in their study sites", the researchers report.

Furthermore, the behaviour was more apparent in locations "with higher numbers of predatory bird species, suggesting that this behavioural defence is more likely to evolve in riskier environments".

While that all makes perfect sense, the question remains as to just how Aegean wall lizards know what their own backs look like. Marshall offered: "One theory is that it is under genetic control, while another possibility is that it develops in early life through learning from other lizards and from experience."

She added: "Although we don’t know what the exact mechanism is yet, we hope to uncover some clues in future research. It would also be interesting to look at whether lizards can adjust their choice of rock not just for camouflage but also to aid thermoregulation (basking site choices) and sexual signalling." 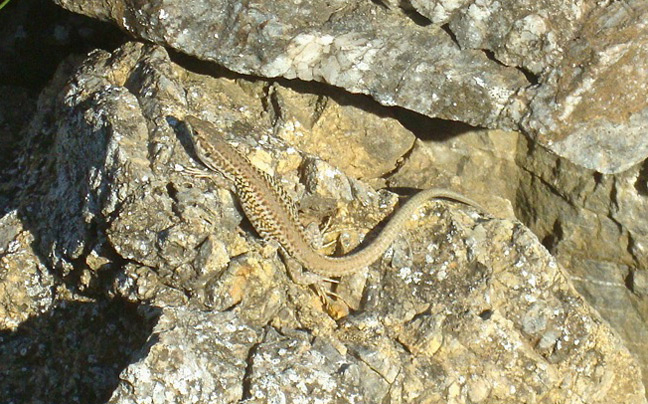 That works for me, time for a quick bask

The camouflaging ability is more perplexing since Aegean wall lizards probably don't perceive their environment in quite the same way as their predators. Marshall explained to El Reg: "Based on a recent paper measuring the visual system of a closely-related wall lizard*, we are fairly certain that Aegean wall lizards are able to see UV, as they have a UV cone photoreceptor sensitive to very short (below 300nm) wavelengths.

"Also other recent work has shown that the same lizards can discriminate between different colours in the ultraviolet part of the spectrum. But it's still likely that they are seeing the world in a different way to their avian predators, like raptors and corvids.