Geek's Guide to Britain On the northern tip of Scotland stands Dounreay – 74 hectares of nuclear site encompassing the world's first fast breeder reactor, and one of the first nukes to be wired into a national grid.

Built in an age of optimism – an era that wanted to turn the destructive power of The Bomb into energy that was too cheap to meter – these days the site is Europe's largest decommissioning and cleanup operation. The clearance won’t be finished until the year 2030, so I thought I'd take a look while we had the chance.

Not that the general public are allowed to wander around the site, or even drop in by appointment – as interested geeks we're limited to the museum in the local town of Thurso and the viewing area, where we're invited to have a picnic but warned that armed police might want to chat about our motivation, which is as much encouragement as a Vulture needs.

It's a far cry from May 1957 when the site was opened and 7,500 people queued up to walk the ground where history would be made, though perhaps if they knew what was going to become of that ground they'd have been less keen. Even now, nuclear power has an almost mystical thrall – extracting energy from the fundamental forces of nature by smashing atoms together until they shatter, even if our modern minds see fear there too.

If it's mystical now it was downright magical back in 1957 when construction started on what would be the UK's second commercial reactor, and one of the first to be wired into the national grid. For the locals, there was the overwhelming excitement that such a modern technology was coming to rural Scotland – these things normally stayed in London, or the South East at least – but the "atomics" were coming all the way to Scotland with expertise, resources, and jobs.

Not that the newly formed Atomic Energy Authority denied the risks, or hid the reasoning behind the choice of location. Public meetings were held and the decision was laid out to the locals, but the promise of economic development easily outweighed any concerns about radiation. Even the experts didn't understand the long-term effects, or the ability of the human body to recover from them, so it's not surprising that the atomics were welcomed with open arms. 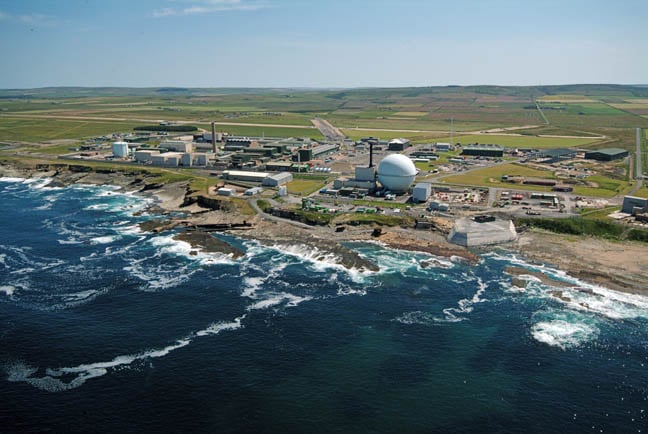 Wish you were here: Dounreay from the sea. Photo: DSRL and NDA

The Authority hadn't been around for long, having been set up by a Royal Charter in 1954. The heraldic crest of Atomic Energy Authority adorns the entrance to the museum in Thurso. The museum itself is only a couple of rooms, attached to the side of the Caithness Horizons Centre where you can also see some Pictish stones and have an average cup of tea in the cafe.

The crest for the Authority, according to the accompanying notes, uses a pair of chained panthers to represent controlled ferocity, and every component represents part of the generating process right down to the "healthy plants and flowers showing the safety of nuclear power."

The plants and flowers were removed from the arms and the "Scottish" version of the arms installed, reflecting the Caithness stone within which the reactor was built.

Observant readers will have noticed that the plants are all dead and the base looks more like moon rock than a thriving ecosystem. The crest on the current Authority web site is equally lifeless, but back in the 1950s the commemorative ashtrays (gifts for visiting dignitaries, complete with depleted uranium in the glaze!) show grass and flowers growing sturdy and strong. 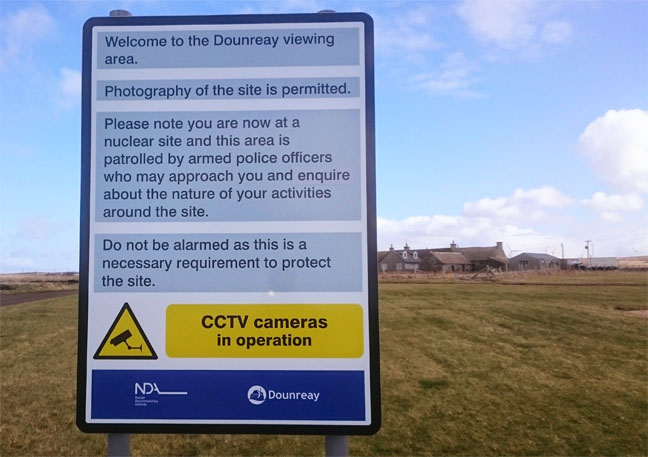 We didn't see them, but they certainly saw us. Photo: Bill Ray

This stuff used to be on display at the site, in an old traffic-control tower, but that became structurally unsafe so the collection was moved into the town. Presentation of the artefacts is a little higgledy piggledy; items are arrayed to suit the display cases rather than building up a coherent story, but time-lines help the visitor to construct a chronological narrative.

That narrative starts with visits from the Atomic Energy Authority, which addressed public meetings and talked a little about the risks, but mainly about the jobs and regional change that the construction was going to bring, and change there was.

At its peak, the construction at Dounreay was employing around 3,000 people, with 1,000 being “atomics” brought up from the south, but that number leaves out the supporting infrastructure and regeneration that came with the nuclear plant.

Before the building of Dounreay, the entire population of Caithness (Scotland’s top right county) was a shade over 3,000, but by 1961 it was more than 8,000 as contractors, builders, engineers and scientists swelled the local towns and villages. The Authority built new villages to accommodate the influx of people, providing a "Householder's Handbook" that reads more like something from Celebration (Disney's utopia in Florida) than a British relocation guide.

Next page: Roses and rock
Page: