To get more details about the restoration we need to walk up the street to the Visitors’ Centre, where we can chat to the people from Dounreay Site Restoration. This isn’t a museum about the past, but a high-street presence representing the area as Europe’s Reference Site for nuclear decommissioning, though it does have cool gloves for those who want to see if it’s possible to complete a radioactive Rubik’s Cube. 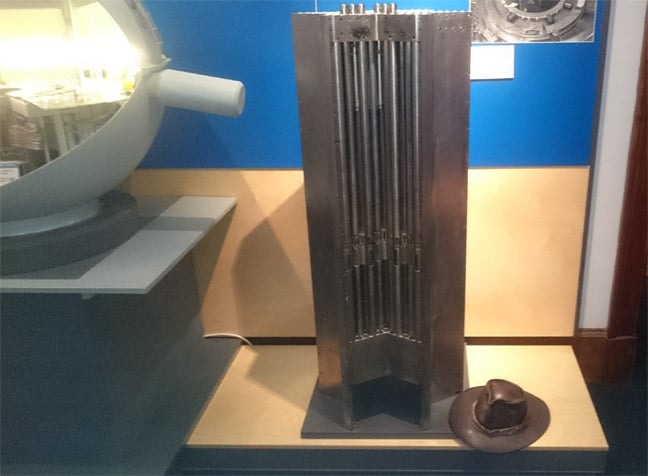 First core, since depleted and extracted, with hat for scale. Photo: Bill Ray

Here we can learn about the companies involved in stripping down the site, companies who expect to be kept busy until 2025, after which the site will be left fallow (but monitored) for another 300 years or so while the radioactive fragments that couldn’t be removed play out their half lives.

Radioactive particles were first found outside the site in 1984, and the beach beside the plant has been closed off since then. Cleanup is a continuous process and the hope is that with painstaking effort every vestige of imported radiation can be removed and eventually the site will be back as it was in 1957, only with a lot more people living locally.

Many of those people are employed in the decommissioning – 1,500 are still working at the site, and that number again are employed around Scotland supporting the effort. Dounreay is providing almost as much employment now as it did when it was being built, and more than it needed to keep generating power, though these jobs do come with an end date which is drawing near.

The Scottish government is well aware of that, and the impact it’s going to have on the area when the jobs disappear. The idea is to build up a decommissioning skills base, ready to take on the rest of Europe’s ageing reactors, but the company admits that “much of the market will not be easily accessible or available to companies based in the UK” so there’s no guarantee of long-term employment.

But for the moment the site is busy, and the car park is full as we approach. Dounreay is about 16km (10 miles) outside Thurso, a pleasant drive along the Scottish coast past (perhaps with some irony) fields of wind farms which we’re hoping will generate the power lost when the nukes go dark.

Approaching the site we’re forcefully guided away from the entrance to a “Public Viewing Area” where someone has laid out parking for two coaches and 24 cars – perhaps a reflection of the optimism with which the plant was built. There are picnic tables, and information boards about local wildlife (disappointingly un-mutated), and the signs warning that armed police might approach.

They didn’t during our visit – perhaps our lone vehicle wasn’t threatening enough: a pair of coaches and a dozen cars would surely have caught their attention. We read the boards, and looked at the site. There was a plan to save the iconic ball of the reactor, it was going to sit alone on the landscape marking what once was, but earlier this year that plan was scrapped and now there’ll be nothing to say what might have been if the dreams had proved more practical than they were. 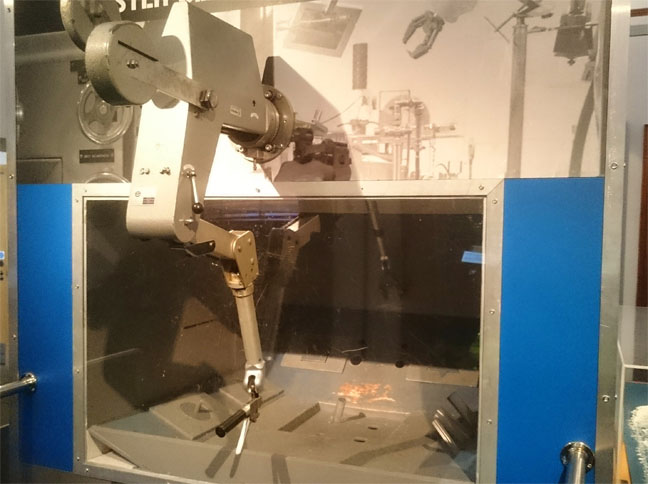 There’s something incredibly British about Dounreay. An engineering marvel, a world-leading technology, a pioneering spirit at the northernmost tip of the country, now being cut into pieces and packed away to disappear with the dreams that fuelled it.

Dounreay was never a failure; it achieved everything it set out to achieve, but the world moved in a different direction and left Fast Breeder reactors, and Dounreay, behind it. By the time the site has gone we’ll probably be able to fly up to this remote northern, coastal-fronted tip of the United Kingdom in our Google-guided, Musk-powered, aerial drones, but we probably won’t remember the pioneers who harnessed the power of the atom and then let it go again. ®

By car: A9 to Thurso, then Traill House, Olrig Street

By train: Regular service from Inverness to Thurso

By car: A9 to Thurso. Follow signs to Caithness Horizons, park in Riverside car park, then walk up Wilson Lane to pedestrian precinct. The main entrance is on your right.