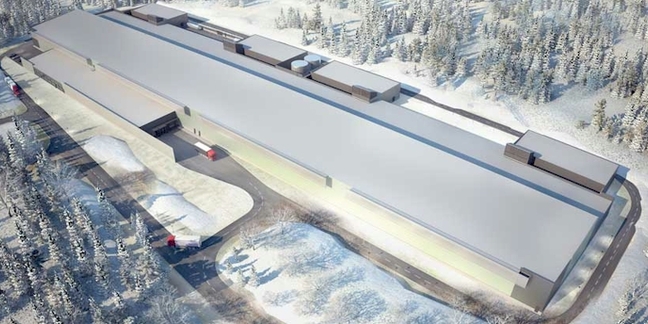 It is easy to view the construction of this particular Facebook's answer to the expiration of Safe Harbor last year, to throw up a repository within the European Union to keep EU citizens' data safe from US data handlers and their subcontractors.

Even easier to see its location, in this case in Republic of Ireland, in terms of yet-another big US tech firm taking advantage of preferential tax rates.

Truth is, a $218m commitment and the effort of developing a 220-acre site would have been based on matrix of factors.

When it comes to picking a location, national and local politicians will certainly have done their best to tempt any incoming data-center provider. Tech firms jobs, local spending and taxable revenue to a region for governments.

The decision-making process of tech firms will have been amply lubricated by the provision of fiscal incentives like tax breaks and grants – as has happened in US states. In Europe, The Ireland is favored by many in tech for its relatively low corporate tax rate – 12.5 per cent – a fact that has lured Google, Apple and others to establish regional head offices there.

That aside, however, geography is playing more of a factor in determining where to place a data center. Firms are looking at whether terrain can play a part in either improving their data centers' efficiency or cutting its costs.

For example, power pumped into Facebook's Dublin data center will be generated using nothing but renewable sources "thanks to Ireland's robust wind resources," Facebook said.

When Ireland comes online it will play its part in helping Facebook hit its stated goal of having half of its infrastructure powered using clean, electricity – meaning not generated by power stations fired by gas, coal or oil - by 2018.

But popping your processing center somewhere windy isn't the only trend finding its feet among tech's super elite. Siting your facility within easy reach of a large – and preferably very, very cold – body of water has been very much in vogue. Some of the biggest data chompers in the world have built or relocated data facilities to the Scandinavian coastline in recent years – Google, Microsoft, and Facebook, with that very first European data center.

But Luela has another advantage: relatively low power usage effectiveness (PUE) ratings. PUE is a measure of the energy efficiency of your data center, calculated on the amount of power entering your facility. The problem is that PUE includes more than just your servers. It includes everything that draws power in your data center – including the things intended to keep things cool, like air conditioning units.

Cooling costs are drastically reduced in places like Lulea thanks to the ability to draw brisk, glacial seawater into your HVAC (heating, ventilation and air-conditioning) system to lower the ambient temperature pumped into your server hardware.

Lulea is just 60 miles short of the Arctic Circle, meaning Facebook is able to use naturally occurring, cool dry air to chill its data centers. That means reduced use of the kinds of equipment that would otherwise push up the PUE.

Going cold isn't the only option and some giants are going to the other end of the thermometer. From the relatively small step of adorning your facility with photovoltaic cells to building a full-scale solar farm in your parking lot, one can turn what would generally be considered a disadvantage to something as delicate as servers – pounding heat – into an advantage.

Apple in February 2015 announced its participation in a 2,900-acre solar panel farm in Monterey, California, with First Solar. Apple will take 1,300 acres of the array. The fruity giant’s Maiden, North Carolina, data center already takes most of its power from on-site solar cells while the company is also developing a solar-powered, 70 megawatts (MW) facility in Arizona.

Google has also gone solar. The internet’s biggest ads flinger two years ago presided over the formal opening of Ivanpath – billed as the Hoover Damn of solar. Based in Southern California, Ivanpath is relatively close to that damn.

Before Ivanpath, the Planta Solar 20 (PS20) solar power plant in Spain had been the world's largest solar-power tower.

Ivanpath has a gross capacity of 392MW and saw Google invest $168m in the project with additional cash coming from the US Government and NRG Energy.

Developing their own software, building their own hardware and generating their own power? Increasingly, this is an option tech giants are willing to pursue meaning the physical properties of a region are becoming as important as any fiscal cherries that might be dangled by local politicians. ®