We've just stepped out of our time machine, and we can reveal ... EMC's new kit for early 2016

These will be announced over the next two quarters and will change the shape of EMC's product lines. We think we now have an overall view of what the mainstream product lines will look like.

The background includes the point that VMware's VSAN/EVO:RAIL/EMC VSPEX Blue products have not apparently been successful, hence the need for a revamp of the core VSAN software.

Thirdly, it is becoming apparent that external all-flash arrays could deliver far higher performance if they had faster network access and also if their media was treated as storage memory instead of block- or file-accessed storage resources. However, this latter development is incompatible with the installed base of SANs and filers.

That gives the first split between EMC's coming new products. On the one hand, we have legacy VMAX and VNX arrays with next-generation ones coming, and on the other we have new arrays, such as XtremIO, which have new software stacks and are not fully compatible with VMAX and VNX.

Here is a chart showing our view of how EMC's mainstream VMAX, VNX and XtremIO product area will develop using this split. 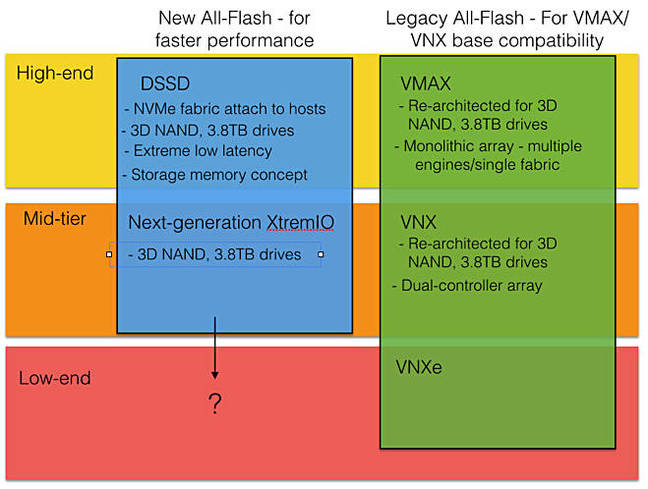 The products are divided into high-end, mid-range and entry-level. Each of these rows is populated in the legacy area by VMAX, VNX and VNXe. In the new generation area we have new-design, all flash arrays; with XtremIO now demoted to the mid-range area. In terms of performance, XtremIO competes with VMAX and VNX; it's just that DSSD is hugely faster still, and so plonks XtremIO in a mid-range ranking. As yet, there is no entry-level all-flash array.

We'll look at each column in turn.

We think we know these things about the forthcoming DSSD array:

Here's a picture of the DSSD D5 product. 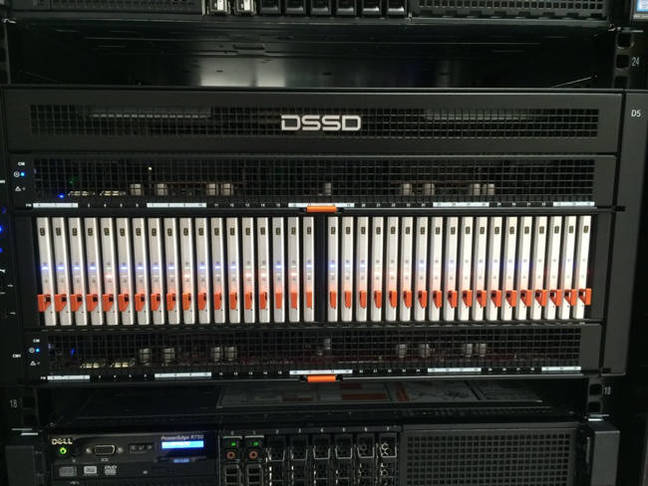 What we see here is 36 solid-state flash modules. We understand these to be NVMe dual-ported devices in a custom housing, meaning their performance or capacity is likely to exceed standard 2.5-inch SSDs. With 36 total, this implies quite a significant amount of total capacity and performance. Let's try and see what this means.

Thirty six 3.8TB drives gives us 136.8TB, raw TB. This compares to HDS' latest HFS array, with a maximum of 96TB raw in its 2U shelf, with the D5 looking to be housed in a 5U shelf. The HFS A270 will deliver one million 32K IOPS across FC or Ethernet cabling.

According to Chad Sakac, each flash module has 512 dies working in parallel in a stacked configuration. Okay, 3.8TB divided by 512 gives us 7.4GB dies, and these use 3D NAND. Samsung is shipping 3D NAND today. 32-layer dies were mentioned last September and we understand a 48-layer product is coming this year.

Sakac says that DSSD has face-melting performance, and our estimate is that this means five million IOPS or more. 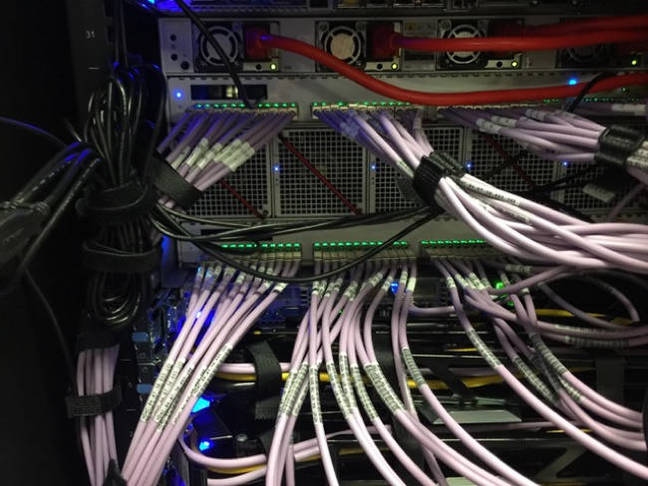 We can see two very dense rows of LEDs that look like four groups of twelve across. That would be 2 x 48 ports = 96 in total. There are presumably two rows for clustered controllers, so that would support 48 clustered connections. The pink cables are, we think, PCI Express wires with the NVMe protocol running across them.

We understand that NVMe Fabrics will support any RDMA fabric base cabling, including Ethernet (RoCE), Infiniband, iWARP, and OmniFabric, with the command protocol and queuing being common and developed from NVMe over PCIe.

The application areas that could use DSSD are:

DSSD will be launched this quarter, and possibly before the end of February.

The XtremIO array is apparently getting re-architected to use 3D NAND and 3.84TB drives. This now becomes a mid-range system and is what EMC would position against Pure Storage, IBM's FlashSystem, NetApp Solidfire and all-flash E-series, Kaminario's K2, the HDS HFS A series, Violin Memory, X-IO and so forth.

We think the capacity per X-brick will rise.

We also think there could be scope for EMC to introduce an entry-level all-flash array, a slimmed-down XtremIO product say, that would kind of fulfill an all-flash VNXe-class product role in our box diagram.

A new-design all-flash VMAX is coming in the first 2016 quarter, and it will use the 3D NAND, 3.84TB flash drives. The VMAX is a monolithic array with multiple storage engines communicating across an internal fabric (Dynamic Virtual Matrix) to all the drives.

Our understanding is that storage shelves are being redesigned to house the flash drives, and the VMAX software is being modified to use them.

Goulden was at pains to say it was more than just flash-module-for-SSD drive substitution: "What we'll talk about in the new VMAX is not just putting a whole bunch of flash drives in an existing VMAX system. We've done a lot of re-architecting, the way that software works, the VMware works, the hardware works to truly take advantage of these new ... 3D NAND-technology at scale which is a lot of work."

We don't expect the base VMAX storage engine-fabric complex to be redesigned in this exercise.

Currently we have the VMAX3 100K running up to 1PB capacity, the VMAX3 200K to 2PB and the VMAX3 400K going to 4PB. We expect the equivalent of a VMAX4 line with a separate all-flash model included and enjoying VMAX-compatibility for management and data services.