What are you going to do about it, Alphabet?

Samsung has added built-in ad-blocking capabilities to its Android browser in its latest OTA (over-the-air) update to its Lollipop 5.0 devices, which include the Galaxy S6.

Apple heralded the much vaunted "adpocalypse" by adding support for ad-blockers in Safari in its iOS9 update last year. Advertising spending on mobile campaigns is increasing more rapidly than other digital formats, in part because it has been harder to block advertising on mobile devices. Publishers have begun to fight back passive-aggressively, refusing to serve content to browsers with an active ad-blocker. The least passive, and most aggressive, was Alphabet (Google) itself: it took technical countermeasures against YouTube ad-blockers, and forced those attempting to block video ads to watch even longer video ads.

Alphabet develops and controls Android, and is almost entirely dependent on advertising for its revenue, which gained it $18.7bn in income in the most recent quarter, clearing $4.6bn in profit. Even with its significant research spending on toy robots (eg, balloons, drones and driverless cars), Google still has a hard time spending the proceeds; Alphabet is on course to hold the best part of $100bn in cash and assets by the end of the calendar year.

Earlier this month Oracle disclosed Google’s estimate that it had earned a profit of $22bn on Android, on revenue of $32bn. Google successfully applied to have the figures deleted from the record. 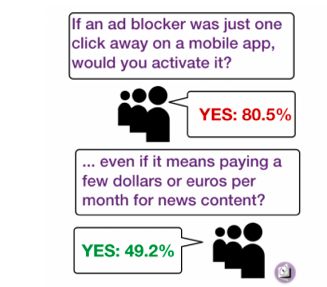 So will Samsung’s move accelerate the "adpocalypse"? Perhaps not as much as you might initially think. Samsung remains the No.1 Android vendor, and has only just slipped behind Apple in total smartphone shipments. But Chrome still dominates mobile browsing, with 41.57 per cent share so far in January 2016, and Chrome’s rise has been consistently steady.

Much depends on the agencies themselves. If mobile ads are generally viewed as degrading the user experience significantly, and if every mobile browser except Google’s Chrome allows ad-blockers, then Google has a real problem.

In a poll of their tech and media industry readers, newsletter Monday Note found that most would use an ad-blocker, but half would pay for content. ®