One year on from a public promise, Intel has the rare distinction of actually coming good on its gender equality issues.

On Wednesday, the chip giant announced it had surpassed its goal of 40 per cent of new hires being female, taking on 43.1 per cent women in 2015: a near doubling of its previous year's tally.

The details are included in an extensive report, and include how the company is changing its corporate culture and supporting outside organizations, including schools, to bring in and retain a more diverse group of employees.

It acknowledges that it is only part way to the solution and needs to continue to improve, but the report also provides several indirect stabs at the tech industry.

For one, it has published detailed statistics – something that is still being resisted even by companies that publish stats on every other conceivable part of their business. That unwillingness was behind the announcement last week by President Obama that the Equal Employment Opportunity Commission (EEOC) would start collecting data on pay by gender, race and ethnicity and his plea with companies to start providing such data.

As a second prod, however, Intel has produced and published a statistic that undermines what has been a frequent response from tech companies to explain why their female workforce remains so low: that there aren't enough qualified women.

Intel lists two figures for "market availability" for both technical and non-technical women: 22.7 and 50.7 per cent respectively. So while it is true there are far fewer women with the necessary technical skills as a percentage of the total market, it does not explain the extremely low percentages that Silicon Valley currently hires.

Intel says it matches non-technical market availability (50.7 percent) but falls short, having just 20.7 per cent women in technical jobs, compared to availability of 22.7 per cent.

That is still streets ahead of companies like Twitter who, despite hiring someone whose sole job it is to increase diversity, and publishing frequent posts about what it is doing to increase gender diversity, boasts just 10 per cent of women in technical jobs and 30 per cent overall.

Even Twitter's goals are limited. It hopes to reach 16 per cent women in technical jobs by the end of 2016. And increase women overall to 35 per cent.

The issue of workplace equality has become a huge one for tech companies – and one that they themselves acknowledge. Apple, Facebook, Google and Microsoft have all produced reports beating themselves up over how poorly they have done, and are still doing, when it comes to the topic. 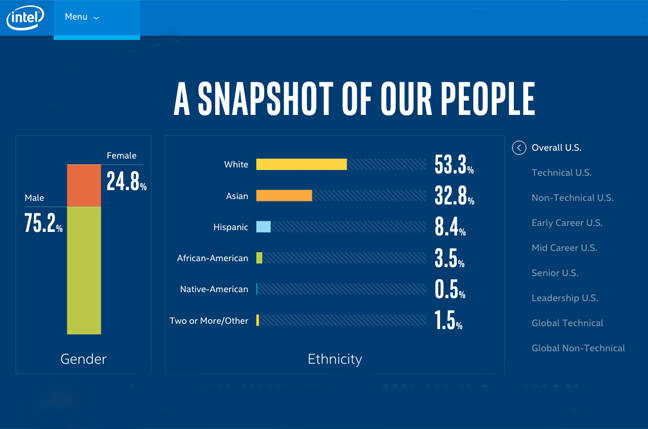 Intel doing better than the rest

And those are the big boys. The rest of Silicon Valley has been repeatedly embarrassed by incidences of "tech bro" culture: the more egregious examples seeing both Tinder and Zillow sued for sexual harassment and an Uber exec threatening to expose the private life of a female journalist who criticized it. And then of course there was Gamergate.

As a result, almost all Silicon Valley companies claim to be tackling the fact that their workplaces do not reflect their customers or the cities they live in. Yet the pace of change remains painfully slow and every (white, male) executive that discusses the issue uses the same formula, perfectly encapsulated in Apple CEO Tim Cook's comment last month: "We are proud of the progress we've made, and our commitment to diversity is unwavering. But we know there is a lot more work to be done."

We are doing well, we believe in this, but we know we have more to do.

So what is behind Intel's comparative success? Its results can be tied almost exactly to a keynote CES speech this time last year by CEO Brian Krzanich when he literally put his money where his mouth is. Krzanich not only promised to set aside $300m over five years to get equal representation "at all levels," but tied people's bonuses to the hiring of a broader workforce, among other things.

"It's not good enough to say 'we value diversity' and then have our workplaces not reflect the full talent-pool of women and underrepresented minorities," Krzanich argued.

"This isn't just good business, this is the right thing to do."

And in getting with the idea, Intel has upped its goals for 2016, saying it will hire 45 per cent women and 14 per cent under-represented minorities.

Size of a cow

Just how bad is the problem? One frequently quoted 2014 report [PDF] from law firm Fenwick & West tracks gender diversity in the Valley and showed that women make up just 11 per cent of executives – which is even 5 per cent lower than companies in the S&P 100.

Fenwick & West has not done a focused gender diversity report for 2015, but has put some findings in its Corporate Governance overview [PDF]. It found that the number of women directors was increasing, but slowly. Women now make up an average of 19 per cent of board members in the Valley, but that compares to 22 per cent in the S&P 100.

There is a wealth of other stats covering the percentage of committee members, committee chairs, executive officers and so on, but they all point in the same direction: far too low and increasing far too slowly. ®