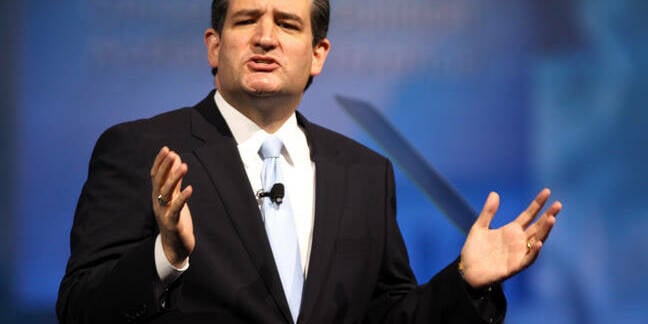 US Senator Ted Cruz has accused the head of domain name overseer ICANN of being complicit in Chinese online censorship.

In a letter [PDF] sent from the Republican presidential frontrunner to Fadi Chehade, Cruz and two other senators demanded that Chehade explain his decision to co-chair a Chinese internet governance initiative.

They also question whether accepting the role represents a conflict of interest, given that ICANN (Internet Corporation for Assigned Names and Numbers) is under contract to the US government for the critical IANA (Internet Assigned Numbers Authority) functions.

Back in December, Chehade surprised and infuriated the internet governance world when he agreed to head up a new "high-level advisory committee" that will develop the agenda for future World Internet Conferences, held in Wuzhen, China, as well as "contribute ideas for the development of the Internet."

Chehade has been looking for a job ever since he announced his intention to leave the ICANN job 10 months early. Despite leaving next month, up until December he had only found a part-time consulting role. Then he announced his plans to front the Chinese government's internet governance efforts.

"Given your assurance to preserve and prolong the free and open Internet, we were surprised and dismayed to learn that you have agreed to co-chair a high-level advisory committee for the World Internet Conference, which is organized by the Chinese government, while you serve as the Chief Executive Officer of ICANN under contract with the United States Government," notes Cruz's letter.

It adds: "Your participation as a co-chair of the committee raises concerns about a personal conflict of interest while you serve as the CEO of ICANN."

The letter points out what most people already know – that China heavily censors its internet. The country was recently ranked last in the world for Internet freedom. The letter also notes that the conference he will be presiding over has faced significant criticism for refusing to allow US reporters to attend, which prompted Reporters Without Borders to demand an international boycott of the conference.

As such, it asks Chehade to provide answers to nine questions regarding his decision to take the post, including whether he informed the ICANN Board or the US government about his intention to do so, whether he has received any form of compensation for the role, and whether he believes that his "attendance and participation in the World Internet Conference makes ICANN complicit in the Chinese censorship regime."

There is nothing that Cruz or even the US Congress can do about Chehade's decision, but it does put another question mark around ICANN's readiness to take over the IANA contract later this year. That critical transfer of power from the US government to ICANN has already been delayed by a year in large part because of ICANN's efforts to avoid additional accountability.

It is within Congress' power to prevent the transition from taking place, although it would require additional legislation to do so and ICANN has been building Congressional support for the plan by spending millions of lobbying dollars on high-profile former government officials: something it sought to hide from the internet community.