SwiftStack's multi-modal 'we're so much better than you' FUD play

Comment If you want a Swift-compliant object storage system, then SwiftStack is the best you you can get. So says, er, Swiftstack itself.

The Swift-compliant object storage startup told The Register this when it briefed us on how its open source software was different from, and better than, competing object storage products.

Douglas Soltesz, SwiftStack's Director of Product Solutions, tells us that SwiftStack's competition offer multi-protocol capability too but it may just be limited to the upload API: "Different protocols have different metadata which may not be 100 per cent visible to other access protocols."

Thus the CIFS or S3 access could only be to certain objects, ones uploaded via that protocol. 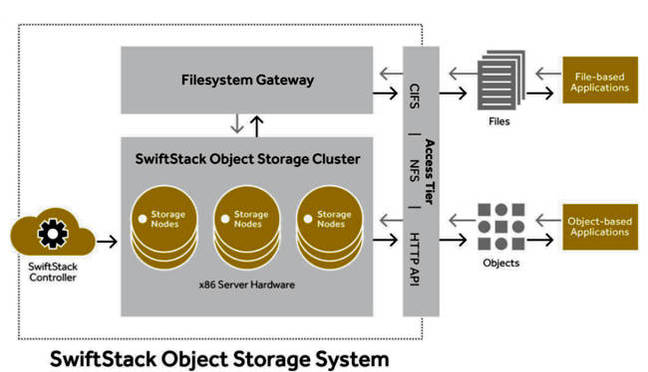 Soltesz also suggested problems existed for other object storage suppliers in the file access area. With Scality objects written using S3 and Swift "can't talk to the file side." For Cloudian, when file side objects are updated their metadata is not visible to other access protocols. You can still access the file side objects though. .

Caringo, HGST-Amplidata, Cloudian and Scality don't support Swift natively; they emulate it. SwiftStack supports Swift natively: "We contribute to the Swift community and can build new features into it. ... When we change Swift it is the standard. It's a unique thing we do."

In the S3 compatibility area Soltesz said: "S3 is the de facto object access standard. Everyone emulates it [and] no one is 100 per cent compliant."

Whenever Amazon comes out with new features everyone has to scurry to emulate it.

Cloudian's sales VP Jon Ash would take issue with this point, having told us recently: "We are the only ones who are 100 per cent S3-compliant."

One of his specific examples was Amazon's S3 sign-on facility, the V4SIG, about which Ash said: "Today Cloudian is the only Object vendor to support V4SIG." Not so fast Jon; HDS tells us; "V4SIG support was introduced in HDS’ Hitachi Content Platform (HCP) in version 7.2, which became generally available on Oct. 20, 2015."

Anders Tjernlund, SwiftStack co-founder and COO, said "We are the fastest growing object Storage player," meaning in customer acquisition terms, and here is a chart he uses to justify the claim: 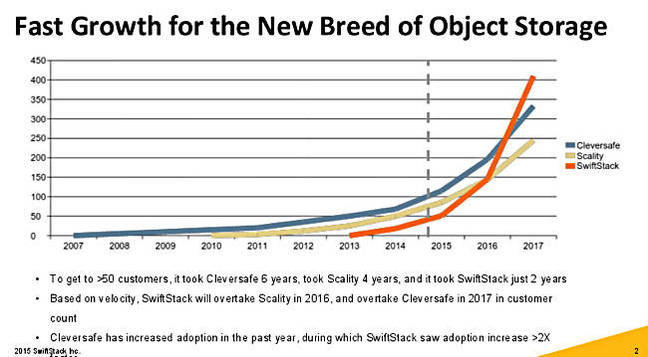 SwiftStack's actual and predcted customer growth relative to Cleversafe and Scality. Note the projected 2016 and 2017 points on the chart.

He tells us RackSpace uses Swift, Oracle's cloud uses Swift, HP's public Helion was Swift, and IBM's SoftLayer cloud is OpenStack Swift, with Swift being built for the public cloud use case.

Soltesz said that, with SwiftStack, metadata is stored with the object data. He says this reduces the number of network hops to get to an object. DDN's WOS has separate metadata nodes, with from three to 11 being used for the metadata store.

However SwiftStack actually puts top-level object metadata, the basic object ID for example and user authentication, in a separate Access Layer, from which you hop across to the Storage Layer. SwiftStack holds the hash table for its Ring of nodes on disk and unzips it in memory. All nodes have a copy of this hash table.

SwiftStack recommends that the hash table is stored in flash, for faster access and greater scale. Soltesz said; "We think 3D Xpoint is very promising," and pointed out that Xpoint co-inventor Intel has put money into Swift.

The Access Layer can be viewed as middleware, and users can add their own code to constrain the object store to behave in certain ways; such as run specialised compression and decompression in the Access Layer.

Object-specific metadata, such as a geo-location tied to an object, is stored with it.

SwiftStack batches up small random reads and also breaks down large file reads into chunks, with the chunks and batches being processed in parallel. Soltesz says that, in this way, it can be more performant than Isilon.

Objects are stored as replicas for protection or erasure coding is used.

SwiftStack can map up to 100 million drives and supports Kinetic (direct Ethernet-accessed) disk drives from Seagate, WD and Toshiba, as it demonstrated at a recent plugfest. Soltesz said SwiftStack was up and running first, with the vendors finding it difficult.

Thinking about flash, and Seagate's focus on hybrid drives, El Reg wouldn't be at all surprised if Seagate introduced hybrid Kinetic drives featuring a slug of flash cache on the drive.

To re-iterate, SwiftStack reckons it is the fastest-growing object storage supplier and will be ahead of Scality and IBM Cleversafe in a couple if years time. SwiftStack believes it has the best multi-mode access, in terms of integrated, multi-protocol object access. It will grow with OpenStack use and with public cloud adoption, meaning not AWS, Google or Azure of course. ®