Exagrid, owncloud and Simplivity all say they're bucking the trend

Amidst the six-way storage startup staff lay-off gloom, another three companies* are going the other way. Exagrid, owncloud and Simplivity are showing the storage market still has a thirst for great products. Wake up competitors, and smell the coffee.

Exagrid, in contrast, tells us:

CEO and President Bill Andrews told us: “We know that eVault (as a result of the Carbonite acquisition) laid off most of their field sales force as we have hired many of them.”

As well as known layoffs at EMC, he’s heard about layoffs at four other storage companies not on our list.

Here’s a provisional chart showing his point of view. 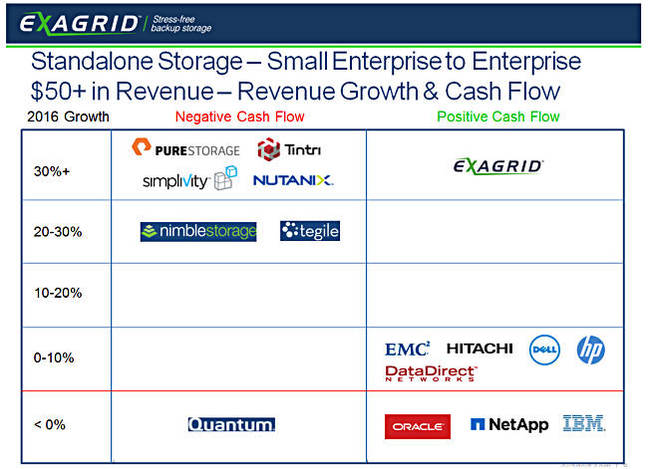 Stand-alone storage vendors have storage that can plug and play in any environment.

What’s impressive here is that a deduping backup appliance-based product line is thought pretty much to be old hat and not a growth sector; witness EMC’s Data Domain and Quantum’s DXi. Yet Exagrid mines the same seam and produces relatively more gold each year.

ownCloud is an open source file sync and sharer with a focus on providing universal file access to mobile device users. It tells us it had 100 per cent revenue growth from 2014 to 2015, scoring $8m in 2015 bookings.

CEO and co-founder Markus Rex says the early indications in 2016 are for growth continuing at this rate, which would surely put ownCloud in the Dropbox/Box category.

Here we have an open sourcer in a hotly-contested area growing like there is no tomorrow. And its funding is derisory; $9.62m since being founded in 2011. Jeez, many startups won’t even begin with a seed round unless it’s more than that.

SimpliVity, the HCIA supplier, more than doubled its 2015 bookings compared to 2014. It grew its customer count by 250 per cent as well. In the fourth 2015 quarter 30 per cent of the bookings came from existing customers; repeat bookings in other words, as customers scaled out.

There was also a nearly 200 per cent year over year increase in the number of active channel partners and new distributors were added, covering or extending coverage in Europe and Asia, Canada and the USA, Australia and New Zealand.

SimpliVity’s headcount reached 750 and new offices have been added in Munich, Seattle, Cork, and Raleigh.

Kempel beams beatifically, as it were, saying: “Demand for SimpliVity hyper-converged infrastructure surged in 2015.”

He needs the momentum of course, and for it to continue, with VMware ramping up VSAN by adding dedupe, compression and erasure coding with v6.2 announced today.

So ten out of ten for confidence, Doron, who claims: “As hyper-convergence enters into the mainstream in 2016, our strong customer base, dedicated partners, and superior technology foundation will perfectly position SimpliVity to dominate the market.”

That means overtaking both Nutanix and VMware’s VSAN, which is a tall order. Trenta Cold** in Starbucks’ cup size terms. Open wide and smell the coffee, HCIA market; tasty drinks are coming your way. ®