Coachella Valley uses its imagination for IT setup

America's second-poorest school district is also home to a surprising IT program that has won it national acclaim.

The Coachella Valley Unified School District, located east of Los Angeles in California's Riverside County, encompasses around 1,250 square miles of largely rural areas. It includes 20,000 students, most from hard-up families and many so far removed from large cities that the daily bus ride to school can take up to two hours.

In such areas, internet connections can be few and far between. When the district began equipping students with tablets as part of a mobile learning initiative, administrators found that getting the devices online outside of school wasn't always easy for the children.

"We looked at the poverty in some of our areas – some of them were not connected," said Dr Darryl Adams, district superintendent.

"Parents were going out and sitting in school parking lots, or at McDonalds and Starbucks."

To address the issue, the district looked at a valuable resource it already had: school buses equipped with LTE antennas and Wi-Fi hotspots were already able to provide access to students on their daily commutes.

"We said 'we've got the bus, we've got the router, why not park it near the trailer parks with 200-300 kids and they can have access?" Adams told El Reg.

From there, the district's Wi-Fi on Wheels program was born. The buses were equipped with solar panels to keep batteries charged (not tough to do in the California desert) and were placed near various communities around the district. The cost, Adams estimates, was around $250,000 for the district. 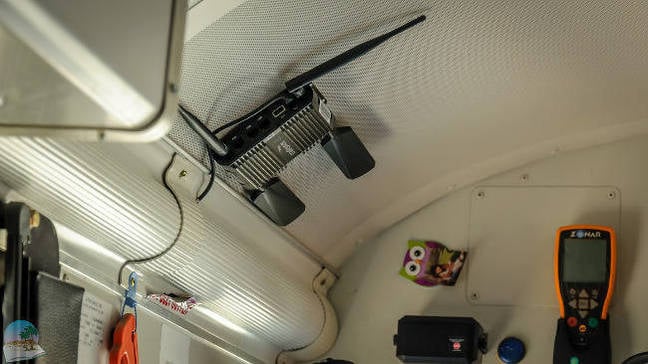 At any given time, up to 10 of the buses can be deployed in various parts of the district, and Coachella Valley Unified soon hopes to expand, creating permanent vehicle hot spots from donated or salvaged cars and possibly expanding the service into a full-fledged municipal ISP for the community. Adams notes commercial broadband availability in the region is scarce.

"You should see the amount of data being used by these kids," Adams said.

The program has also received national attention, getting Adams national media exposure and a trip to the White House.

"It is amazing how surprised people are," Adams said.

"I thought it was just a common sense idea, people are just amazed you can actually do that." ®