The computing systems at Lords Bridge pre-date magnetic storage, with paper tape being the preferred media. There was no actual computing done at the site; tapes were taken to the university for processing. The astronomer would configure the telescope by punching a tape with the required co-ordinates and then take it into the university to use EDSAC.

This would produce another paper tape. This was then taken back to Lords Bridge where the second tape would be used to control the telescope for its run. Signals were recorded on a third tape, which was taken back to the computer for analysis and combined with other results, which were then saved to magnetic tape.

The control room for the One Mile telescope feels like a Jon Pertwee era Dr Who set, with gas-discharge clocks plotters. Something notably absent from the radio astronomy side is anything resembling a PC. There are a few oscilloscopes and lots of paper tape punching and winding equipment but the whole place feels as though it’s in a time warp.

In addition to the radio telescopes, there is one optical telescope, the Cosmic Anisotropy (CAT) Telescope housed in a former munitions bunker. Like the radio telescopes, it relies on the planet's rotation to conduct scans, with a series of mirrors used to build up the image. This image is fed into the bunker, which was covered with earth during the 1980s to provide a cool, environment for the complicated optics.

When can we visit?

Alas, visiting the site is near-impossible for most – it’s not generally open to the public and I was a guest of the Cambridge Wireless’ Heritage SIG. However, the University does have an outreach programme and is keen to hear from other groups, schools and organisations that want to visit.

If you do happen to be in the area, or if simply want to bag some drive-by bragging rights, then you’ll find Cambridge is a wonderful part of the world. It’s not far from Junction 12 of the M11, which means a trip could easily be combined with a visit to the excellent Imperial War Museum at Duxford, which is just off Junction 10. 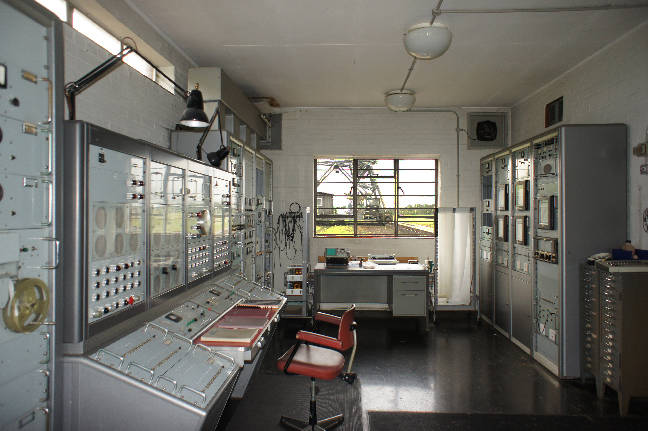 The One Mile control - like you've travelled in time... backwards. Photo: Simon Rockman

While there are lots of great places to stay around Cambridge, I’d recommend actually staying in Cambridge, and taking the opportunity to wander around the city. In particular, I’d recommend the Regent Hotel, and while there go for a coffee at Hot Numbers, where some of the brews look like science experiments. It’s a good place to visit to bring your thoughts back down to Earth after the observatory.

While there, you can ponder the Mullard Radio Astronomy Observatory. It is an incredible place responsible for a major development in our understanding of the Universe. This, and its awesome appearance. It's almost as though there is a full map of the universe and the whole 150 acres of the Mullard is a microscopic dot with a sign that reads: “You are here.” ®

By car: Leave the M11 at exit 12 for the A603 and head through Barton. The observatory's entrance is on the left-hand side of the road.

N/A - not open to the general public