HPE is going to unleash a Machine on us. Here's how it might play out

The decomposable infrastructure endpoint and our route into its gaping maw

Comment At the far end of HPE's storage and compute strategy is the Machine, the dynamically composable infrastructure thing with separately scalable compute, memory/storage and networking resources.

It has a huge flat and persistent memory space using storage-class memory (SCM). It was supposed to use memristors, but since that technology is still five years or more away, HPE has a strategic arrangement with SanDisk for the two to use SanDisk resistive RAM (ReRAM) technology, which is a future persistent memory technology under development by SanDisk and not yet commercially available – nor announced.

The implication is that SanDisk ReRAM lags Intel/Micron's 3D Xpoint memory which is supposed to become available in Optane product later this year. Potential Xpoint users such as Plexistor are testing the technology now.

How will we progress from current HPE servers and StoreServ flash storage to Machine 1 (SanDisk) and Machine 2 (Memristor)?

HPE Machine node board mockup (from sister pub The Next Platform).

We could see a way to go from ProLiant/StoreServ in these stages:

In this scheme HPE does not use Xpoint technology.

Here is a conceptual diagram of the machine from our sister publication, The Next Platform; 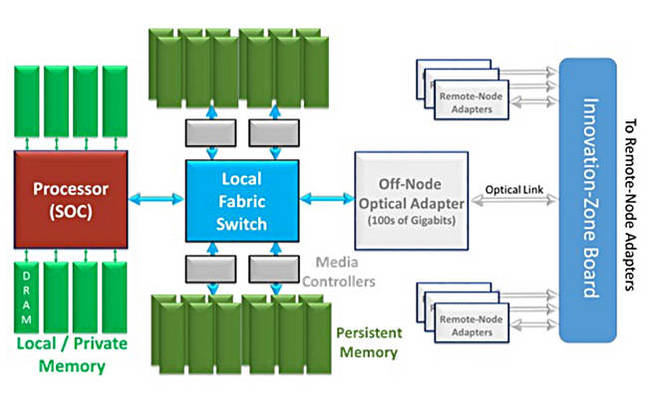 Conceptually a multi-core and probably multi-CPU system-on-chip (SOC) unit talks to local DRAM (with eight DIMM slots). It uses a fabric switch (NVMeF and Silicon Photonics?) to talk to pool of persistent memory (ReRAM or Memristor) through media controllers. There is an optical adapter to talk to other Machine nodes or other systems.

The processing complex could use ARM or x86 CPUs, and the processors have caches between themselves and DRAM and persistent memory. Data in these caches has to be written (flushed) to persistent memory for it to persist. Thus low-level system code has to do this and check that it’s been completed via some form of acknowledgement. And high-level code needs to trigger cache flushes when data that needs to be persisted is written into a cache, or know that this is being done.

It’s IO, in other words, only blindingly faster than IO to DAS, and it has to be managed.

HPE will be providing a number of APIs that make this the case, and that’s part of the system software changes needed with storage class memory and the Machine

Can we deduce or infer anything about timescales?

Humour apart, there are two profoundly unknown variables here: the time for SanDisk to come up with productised ReRAM drives; and the time for HPE and its fab partner(s) to produce productised Memristor drives.

It could be that SanDisk, pre-occupied and distracted by its WD acquisition and subsequent integration into that company's HGST-managed flash businesses, which are already facing their own integration process, takes several years to devise and produce its own ReRAM drives.

This could encourage HPE to use 3D Xpoint drives as a stopgap, a step which we think it doesn't want to take. Having control if its own SCM destiny would look far more attactive than being just another XPoint channel for Intel, and so being in Intel commodity hardware competition hell for SCM as well as DRAM and CPUs. ®