Cable giant still not sure why its network went kaput

Comcast says it is still working to figure out the cause of an outage that hit subscribers across the US Monday.

A company spokesperson told The Register that as of Tuesday morning, "Our engineers continue to work on this issue to determine its cause and find a solution to prevent it from occurring again."

This after users in multiple parts of the country complained of sporadic service and outages on their Comcast connections. Monitoring site DownDetector reported multiple instances of outages, while Outage.Report provided El Reg with a map showing its reported issues: 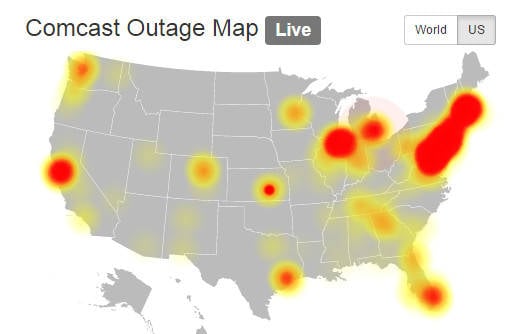 Comcast customers were less than thrilled by the prospect of a widespread outage on the Presidents Day holiday:

Comcast acknowledged the issue and reported that service was back to normal by Tuesday morning, saying via spokesperson:

"We have repaired the temporary network interruption that impacted some of our services yesterday morning. Our engineers continue to work on this issue and almost all services have been restored. We apologize for any inconvenience this has caused our customers." ®