British bank reform was a boon to bandits.

The reforms known as the New Payments Platform (NPP) is slated for operation late next year and is designed to push the antipodean banks to innovate, while providing cheaper and faster payments for consumers.

It is now in a design-and-elaborate stage after the appointment of the Society for Worldwide Interbank Financial Telecommunication as the system's designer and operator.

The Melbourne carding crusader, previously of Australia's 'Big Four' ANZ Bank and the only security wonk on the NPP panel, says the new scheme will open up an avenue for rapid transactions leading to a potential doubling in current fraud levels.

"Immediate cash-out of compromised online banking accounts via real-time payments is highly desirable and therefore the rate of attack is likely to increase," Dalgleish says.

He goes on to opine that "... the current model of delayed payments provides a window for banks to detect, hold and recover funds which have been transferred fraudulently.

"The NPP will remove this safety net for the majority of payments and the potential fraud loss implications are material."

Present recovery efforts mean an Australian bank may recover AU$800,000 of a $1 million heist thanks to payment delays.

Dalgleish says this will evaporate under the NPP.

Britain has already undergone the process under its 2008 Faster Payments scheme under which fraud spiked. 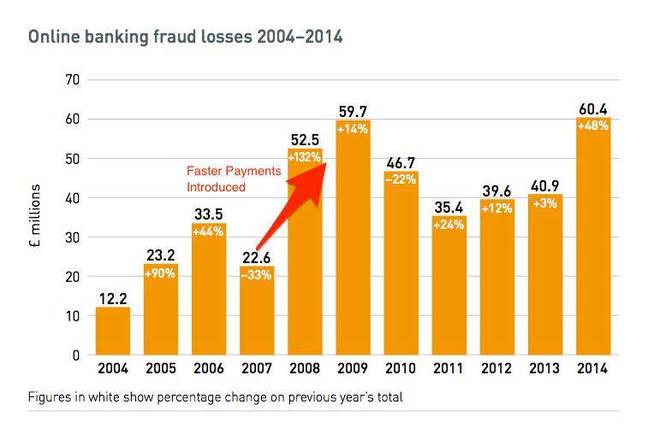 Fraud in the UK after Faster Payments.

Fraud in the UK rose from £0.37 per capita to £0.98 after the scheme was implemented, thanks to the loss of the post-transaction safety net.

Based on those figures he says Australia should expect a doubling in fraud counts estimating it could tip A$27.6 million.

"Obviously there are many assumptions such as comparable inherent controls, attack vectors and velocity, but it is not" an unreasonable assumption, he says.

The UK has undergone a push to innovate its banking sector including the potential opening up of APIs to allow access to bank data.

Those interested in the NPP can read a December document (PDF) by the Australian Payments Council that spells the plan out in detail. ®