CK Hutchison’s Three network will become the first UK mobile operator to block ads, threatening to undermine the $100bn mobile ad business, and app developers and publishers who depend on them.

Three confirmed to us that apps will be starved of ads once the blocking is turned on. Although Three is the smallest of the four networks in the UK, make no mistake, this escalates a conflict that has been simmering for years.

To date, ad blocking has entailed a user-directed manipulation of the data that arrives on the client device. Apple and Samsung raised the stakes by helping users and developers to do this. But Three’s action is significantly different: it’s network-level blocking. Hutch is treating advertising like malware, or spam. Since Three owner CK Hutchison is an investor in Shine, which creates the network-level blocking tech, it’s reasonable to infer that the move is long-term and strategic.

Hutch explained today that it’s implementing ad blocking because “customers should not pay data charges to receive adverts.  These should be costs borne by the advertiser.” It added that “some advertisers use mobile ads to extract and exploit data about customers without their knowledge or consent”, and the overall experience is degraded by “excessive, intrusive, unwanted or irrelevant” advertising.

If you’re depending on ad-funding for your game or bus app - you may disagree.

Strangely the net neutrality crowd have gone very quiet. Shouldn’t a web page get to the user just as the originator intended? Fear of networks manipulating data was how the whole neutrality scare started in the first place. Don’t app developers, advertisers and publishers have a speech right, too? Perhaps not.

It says a lot about how wretched mobile advertising is, in reality, that so far nobody in the neutralist camp has dared defend the principle upon which their other arguments depend. (“Throttling content: bad, except throttling ads: good”.) Nobody in the net neutrality camp wants to be seen to be defending mobile advertising, even if the result is complete intellectual incoherence.

Publishers and app devs may have a stronger case exploring copyright law and restraint of trade to fight the developers. 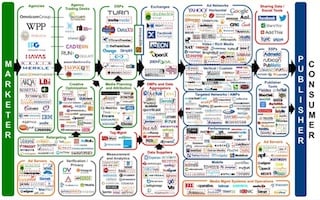 Does this looks straightforward and transparent to you?
CLICK TO ENLARGE

As Three points out, the publishing and software industries need to come up with alternatives. There’s no shortage of blame to go around. Three significant industries have failed here. What is laughably called the “digital economy” has become overly reliant on advertising, and print producers failed to build their own digital platforms, ceding control to the technology middlemen. The economics of the internet haven't worked out for anyone, except a handful of Silicon Valley plantation owners who can extract rent from their advertising monopolies. The advertising industry created a model of such complexity that fraud is endemic, and fixing the fraud extremely difficult.

Perhaps it might be simpler to start all over again. A new internet needed, sooner rather than later. ®