It's said that the most stressful situations a human being can suffer are the death of a loved one, divorce, moving house, a major illness and losing your job.

We might add to that living in Syria and, if mobe outfit Ericsson is to be believed, enduring a "time-to-content delay" when attempting to eyeball a vid on your phone.

Yes indeed, according to the "Ericsson Mobility Report" - in which "neuroscience technology was used to objectively measure emotional responses to varied smartphone experiences" - tardy loading of "web pages and videos under time pressure caused mobile users' heart rates to rise an average of 38 per cent".

Ericsson elaborates: "Six-second delays to video streaming caused stress levels to increase by a third. To put that in context, the stress incurred is equivalent to the anxiety of taking a math[s] test or watching a horror movie alone, and greater than the stress experienced by standing at the edge of a virtual cliff. Once a video begins, an additional pause can cause stress levels to increase dramatically."

In case you're having trouble visualising just how traumatic delayed content is, here's a handy graph: 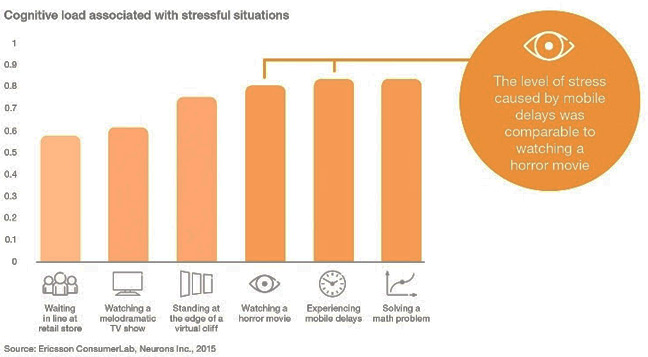 The upshot of all this is, according to Ericsson's department of the bleedin' obvious, is that "the Net Promoter Score (NPS) of an operator increased significantly when associated with a delay-free experience". That's to say, mobe customers prefer stuff to load with alacrity rather than not, the better to avoid terrifying levels of stress. ®