MWC16 Imagination – the Brit chip design house whose GPUs power Apple iPhones and iPads – has come up with another graphics processor: the 8XE. This could well be the brains inside your next telly or car dashboard.

While Imagination's PowerVR XT blueprints end up in iThings, tablets and other high-end devices, the XE family of GPUs is aimed at the other end of the spectrum: wearables, industrial control panels, smart TVs, IoT gadgets, set-top boxes, bargain smartphones, and so on.

The XT line prioritizes performance per milliwatt over performance per size, whereas the XE family is the other way around: the latter is designed to only include must-have features to keep die sizes small, which is vital for producing cheaper chips to fit in tight spaces and cost-sensitive products.

The Series 8XE will be announced today in time for the opening of this year's Mobile World Congress in Barcelona. Crucially, Imagination will stress that the 8XE supports the software interfaces that developers expect to use with any modern GPU: specifically, the OpenGL ES 3.2 and Vulkan 1.0 APIs. And while the XT series is concerned with fast 3D graphics and GFLOPS performance, the XE is all about high-speed pixel fill-rates.

Sure, the 8XE – which uses the PowerVR Rogue architecture – will accelerate 3D operations for you, but it's better suited to rendering smooth user interfaces with nice little effects; the sort of on-screen eye candy you'll either love, or hate, or love and then grow to hate. 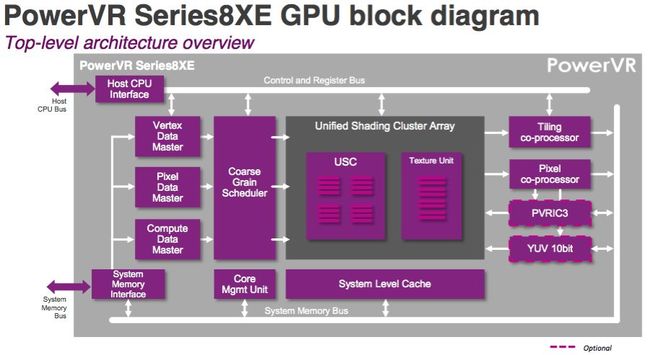 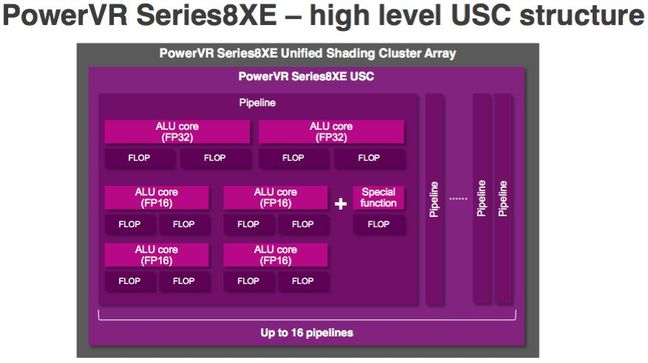 Imagination says the 8XE is 25 per cent smaller than its predecessor the 7XE, which was announced in November 2014. The 8XE GE8300, aimed at 4K TVs and in-car infotainment and the like, can bash out four pixels per clock tick. The GE8200 has half that fill-rate, and is aimed at products that aren't as, well, good as the GE8300's target gear. The 8XE also features Imagination's hardware virtualization technology OmniShield, which basically means the GPU gets an MMU to lock down which parts of memory it's allowed to access for security and privacy reasons.

So that's the tech stuff out of the way. Now here's the thing about companies like Imagination that fascinates your humble hack: although Imagination is ready to announce the 8XE, it won't ship in products until the end of next year. Processor manufacturers have to license the designs, incorporate them into system-on-chips, get them tested, validated and fabbed for sampling, get drivers written, then products have to be designed around the SoCs, tested, validated, approved, built at volume, and finally sold to people.

That means designs started six months ago, and announced today, have to be relevant and competitive in 12 to 23 months' time, and remain competitive while the next hardware iteration is being worked on.

I don't even know what I'm doing in the next 23 minutes, let alone the next 23 months. Given that technology can change at an astonishing pace, how do you know right now what's going to be good enough to ship for Christmas 2017?

One trick, Imagination's Peter McGuinness told us, is to look at technology that's coming onto the market and try to do a cost-effective version of it. Gadgets and gizmos that are new and expensive today are likely to be the next affordable mass market devices. Manufacturers will be scouring the market for components that are cheap and capable to sell in high-volume gear, and you'll want your chips ready for the job.

"It's very difficult to predict," said McGuinness, who started his career as a silicon chip designer in 1980 and, several patents later, is now director of multimedia technology marketing for Imagination.

"To make it easier, and without having to use a crystal ball, we look at trends. For example, people have been talking about 4K TVs and 10-bit color for several years. You might think that’s all been done, then, and that it's a solved problem. Well, actually it's not.

"The penetration for 4K TVs is really quite slight, and in the big markets like China, they’re still in 1080p or HD TV scaled up 1080p. It's going to take five years to penetrate 50 per cent of the market, and to do that manufacturers need to deal with the cost. Consumers are unwilling to pay a premium for 4K, and the TV market is brutal: manufacturers aren’t making any money.

"Our job is to drive down costs so the manufacturers can make money. The story is pretty much the same in the automative world: the cost of [high-end] dashboards is being driven down into the mainstream. Car makers don’t care too much about power consumption, it's obviously a concern, but what they really do care about is cost."

Finally, version four of the PowerVR SDK has been released, and is available under an MIT open-source license. ®