Look who's avoided getting chatty about XPoint again. Micron... let's get non-volatile

Into the third dimension, beyond DRAM and flash

Its operating priorities in 2016 for non-volatile memories are:

Gen 1 3D NAND, with 32 layers, is coming from Micron’s FAB 10 in Singapore. It thinks its gen 1 3D NAND will have a 25 per cent lower cost than current 16nm planar (2D) NAND. TLC (3bits/cell) 3D NAND production will be prioritised over MLC (2bits/cell), with TLC output soaring past MLC in the first 2017 quarter. 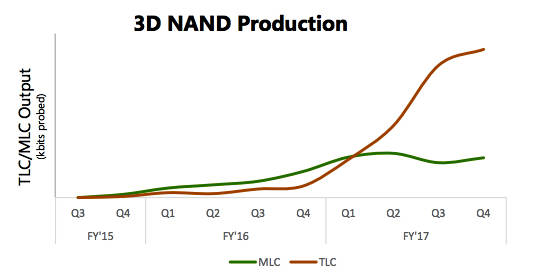 The company did not mention the number of layers in the gen 2 3D NAND technology. We remind ourselves that 3D NAND density can be increased in three ways:

The presentation talked about QLC flash but not in any firm way and we know that QLC flash will have a slower performance than TLC flash as well as lower endurance, suggesting that controller functionality has to be extended to counter these effects.

We would not be surprised if the gen 2 3D NAND from Micron featured a smaller cell size as well as or even instead of an increase in the number of layers.

Rakers writes that “Micron conceded that it missed the boat on TLC over the past couple years and the company intends to fix that going forward.”

There is a multi-generational roadmap for 3D XPoint memory. The first generation is on its scheduled track for mass production. 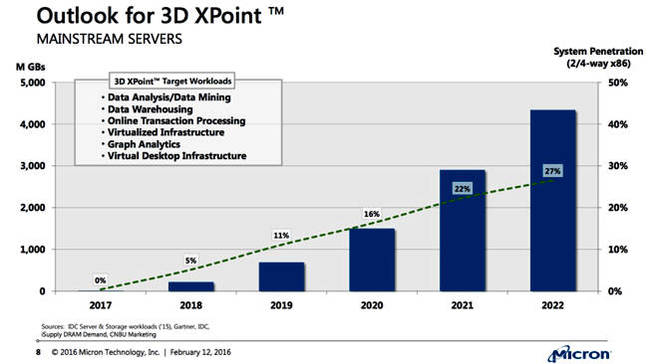 The chart shows 4.4 exabytes of XPoint will ship in 2022 in mainstream servers with almost half the 2- and 4-way X86 servers using it.

The XPoint roadmap is intended to deliver improvements in cost/bit, performance and density. This could come from a die size shrink and/or from an increase in the number of layers. Neither possibility appears on the slides, Micron keeping its XPoint specifics behind a tightly-wrapped kimono.

Beyond XPoint, current 20nm DRAM chip activities and planning for a sub-20nm DRAM (1Xnm - possibly 16-15nm, then 1Ynm and 1Znm with shrinks on one axis at a time), Micron is looking at two future memory technology areas.

New Memory A is in the DRAM, high-performance area with advances in retention, speed and endurance, suggesting its is a non-volatile memory.

New Memory B is a lower-cost memory in the NAND area, again thought to be non-volatile.

In SSDs PCIe NVMe and SAS will dominate high-end workloads for server and storage. Next generation systems will enable drives greater than 1TB. Micron believes scale-out servers with SSDs are challenging traditional storage architectures with capacities moving rapidly past 2TB. In hyperscale deployments, SATA will be dominant as latency is valued over pure performance.

In the client area, SSDs are mainstream in ultra-portables for form-factor and power reasons, and SSD adoption continues to grow (~35 per cent in 2015) even with flat/down PC demand.

We’ll see 3D NAND SSDs for the enterprise in 2017’s first quarter which will have the highest performance and capacity across SAS and PCIe interfaces.

The majority of Micron’s Majority of NAND fab output will be 3D NAND in Fall 2016 (late September to late December).

Check out the Micron slides used at the event here (47-slide PDF). ®