A team from London University's Queen Mary (QM) tentacle is rattling the tin down at Kickstarter for its "Bela" - an open source "embedded computing platform developed for high quality, ultra-low latency interactive audio". 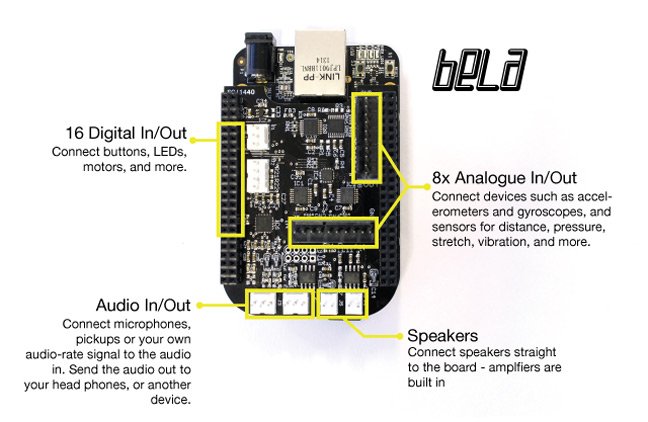 The key selling point of Bela is its ultra-low latency - "as low as 1 millisecond from audio in to audio out" - achieved by a bespoke custom audio processing environment based on Xenomai Linux extensions.

The blurb explains: "Your audio code runs in hard real-time, bypassing the entire operating system to go straight to the hardware. We have written a custom audio driver using the Programmable Realtime Unit (PRU), a microcontroller on the same chip as the BeagleBone Black CPU.

"This driver is capable of buffer sizes as small as 2 audio samples for very low latency, and its performance is not affected by other system load. No other embedded Linux platform can match this performance."

Bela can be programmed directly in C++ or using Pure Data via Heavy Audio Tools.

Bela is the brainchild of QM's Augmented Instruments Laboratory in the Centre for Digital Music, which has already power chorded its way past a modest £5,000 Kickstarter goal.

A pledge of £55 will secure you a Bela cape, or for £89 you can have the cape plus a BeagleBone Black. For £199, you can enjoy the Bela-based D-Box hackable musical instrument: