Oracle adds own cloud tier to its mainframe VTL

Oracle has updated VSM 6 to v7 four years after VSM 6 was launched, adding beefier CPUs, greater scale and auto-tiering to Larry’s own cloud.

VSM is a deduping virtual tape library (VTL) or disk array with a tape library interface, and up until now has been for mainframes only.

It can write data to an attached tape library for slower speed restores and/or for archiving. It can also have an extension product, Virtual Library Extension, to add more disk capacity.

VSM 7 notably adds policy-driven automated tiering to the Oracle Public Cloud (OPC) , with data either stored in the OPC Object service or the OPC archive service

Oracle says VSM 7 has more performance than, and twice the capacity of, VSM 6, and scales up to 256 systems. Here are the basic VSM 7 specs: 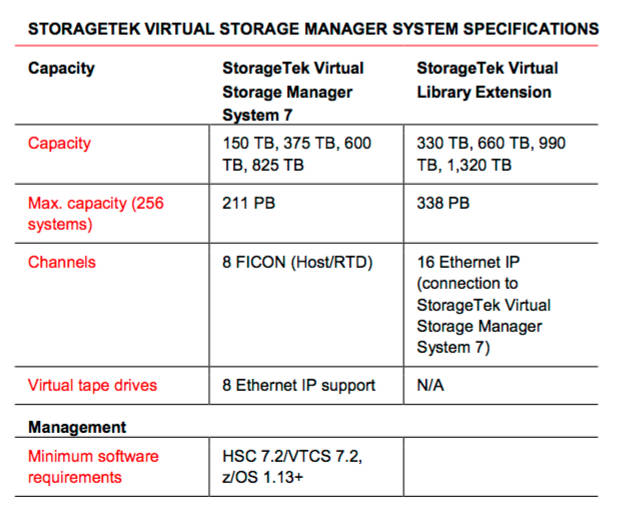 The big boost comes from the use of Oracle’s SPARC M7 processor. We’re told this has a Silicon Secured Memory feature: always-on, hardware-based memory protection, which detects and reports memory reference errors and is meant to stop unintentional or malicious access of data in memory.

Collect a VSM 7 data sheet here. VSM 7 will be available this quarter, and there was no pricing info in Oracle's release. Prepare your wallets for eye-watering pain. ®