Mark Shuttleworth, founder of Ubuntu, told The Register that converged devices – phones that can also be PCs – are the future of personal computing.

Shuttleworth was at Mobile World Congress (MWC) in Barcelona last week, where Ubuntu exhibited to show off its phones, tablets, and IoT (Internet of Things) initiatives.

Among the displays was BQ's Ubuntu tablet, which has both a tablet mode and a windowed mode that can be enabled when attached to an external display, keyboard and mouse.

"We’re showcasing Ubuntu as a converged OS," said mobile product manager Richard Collins. "It’s one codebase that can go onto any device that has some kind of need for a display, one SDK that developers can use. We’ll do the magic to make sure that apps scale for the display. All of that has been engineered into our first tablet product. If you connect a mouse and keyboard, it is running a full Ubuntu PC."

Ubuntu smartphones were also on display, destined for the Chinese market, from brands well-known in China, such as Meizu. Collins said that Chinese vendors wanted to build their own ecosystem, and that Ubuntu gave them freedom to do that.

At MWC Microsoft, along with partners such as HP and Acer, were pushing the idea of Windows 10 Mobile as a converged phone and PC, using the feature called Continuum. Shuttleworth said he was delighted.

“We’re quite lucky because HP made this big announcement that they were going to do a convergent device, a phone that could be a PC, and we’ve already got it. It really shifted people’s mood. We’ve been saying that we could build, as an open source project, a single device that could run across all these form factors. People have said that’s a little crazy, and now suddenly we’ve got some of the biggest companies in the world saying that’s a great idea,” he said.

"There’s stuff coming down the pike in terms of changes to personal computing form factors which I think will take this and make it the standard way everybody works. It’s hard to see now, but I’m convinced that’s the future," he added. 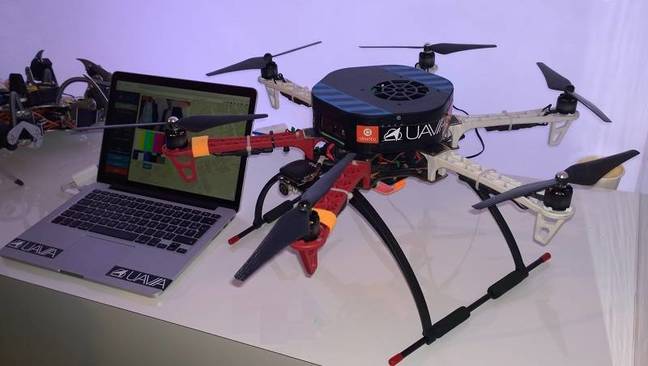 A drone running Ubuntu, made by Uavia

"We’re just a common operating system, but the way we’ve structured that solves one of the key problems for the world, which is the security of the internet of things. That means for example that last week’s major global compromise of Linux libc, which affects pretty much every home router in the world, all the carriers in the world could have fixed that problem if they were using this mechanism, because they would just have pushed the update, and they wouldn’t have to wait for the device manufacturers or do it independently," he said.

What are the advantages of Ubuntu over Google's Android, which is also Linux-based?

"In the devices space the key question is, is that a small server running that Uavia drone, or is that a phone? If you think of it as a server, then people’s natural inclination is to use a server operating system. If you are the developer thinking, I’m going to write that software on my laptop running Ubuntu and I’m going to test it on the cloud with Ubuntu, so the natural place to run it on the drone is Ubuntu," he said.

"In phones Android has a phenomenal position. We serve the needs of people who want a very secure personal computing platform, and that’s enough for me. If personal computing gets reinvented again, who knows, we could be in front of that next wave.

In tablets and phones, Ubuntu has the same issues as any mobile OS that is not iOS or Android, which is lack of applications. In this respect, even Windows 10 Mobile is ahead. Libre Office is no fun on a tablet, because it is not designed for touch.

"We have a new generation of apps that have been designed for touch and convergence," Shuttleworth assured me, but added, "You’re right, we do need to create a new set of apps."

For this reason, your next phone is unlikely to run Ubuntu.

The convergence idea is also an open question. While smartphones now have the computing power to equal basic desktop computers, the difficulty again is whether converged apps, that run seamlessly both as mobile and desktop software, really make sense.

HP's solution is that you use Windows Mobile as a client for cloud-hosted remote applications when docked to an external display. At MWC, Intel showcased another idea, with Android and Linux stacks side by side, running different sets of applications.

One thing is for sure though: Microsoft is not alone in chipping away at this concept and trying to make it work. ®