Who says Chocolate Factory and State Department are too close? 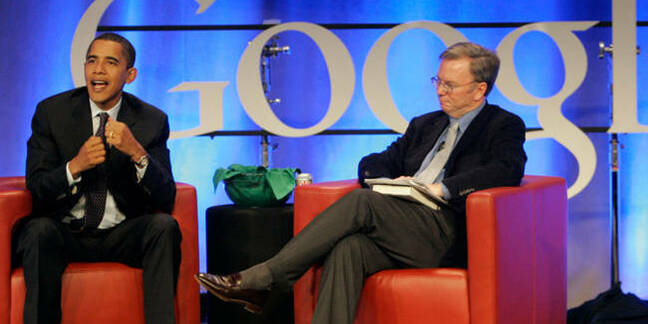 RSA 2016 Eric Schmidt is off to the Pentagon to marry up pampered Silicon Valley brains and the US military's obsession with violence.

Specifically, the exec chairman of Google-owner Alphabet will head up the new Defense Innovation Advisory Board. US Defense Secretary Ash Carter told the RSA audience in San Francisco this week that the appointment will allegedly bring to the Pentagon “the brightest technical minds focused on innovation."

Schmidt's, and Google's, close relationship with the US administration has oft been noted. He is considered a professional bosom buddy of President Obama, and was accused of “back-channel diplomacy” by Julian Assange after Schmidt visited the WikiLeaks boss while he was under house arrest in Norfolk, England.

We're told there will be up to a dozen members of the board, and that these would be "individuals who have led large private and public organizations, and excelled at identifying and adopting new technology concepts."

"If we don’t innovate and be competitive, we’re not going to be the military that the country needs and deserves," Carter told his RSA conference audience.

Carter recently put in a defense budget request of $580bn, claiming cyber and space wars which are apparently going to engulf the planet within the next “10, 20, 30 years.”

The Defense Innovation Advisory Board is modeled on the Defense Business Board, whose members are appointed annually by the Secretary of Defense to enable the Pentagon to operate effectively within the private sector.

Schmidt told reporters he had a list of possible members for the advisory board, although none had been contacted at the time. We look forward to reading commenters' suggestions. ®