You know it’s going to go wrong, don’t you?

Something for the Weekend, Sir? “Ah, it’s sod’s law,” murmurs the person sitting next to me. I nod agreeably. It was inevitable.

I am attending a brief awards ceremony for student journalists prior to this year’s Hugh Cudlipp lecture.

Young journos, we were reminded, were masters of digital content and were making their names through the use of social media and blogs. They are the journalistic disruptors of the coming age.

The winner of the top award could not be with us tonight, as she is still in Ukraine on a single-entry visa, but why don’t we take a look at a video of her digital achievements?

Before the presenter has finished speaking, I realise he’s just set himself up. Sure enough, the video on the big screen begins playing with no audio track.

After 10 seconds of this, the presenter puts on his “if you were my employee you would be dead by now” face and states through gritted teeth that he would appreciate it very much if someone could switch on the sound. I wouldn’t mess with him: it’s Daily Mirror editor-in-chief Lloyd Embley, who even on a sunny day looks as if he’s ready and willing to wrestle gorillas.

If there is any fluster of activity in the projection room, there is no evidence of it in the auditorium as the audience nervously shuffles in their seats as the silent movie continues. I half-expect to see the video interspersed with flickery, hand-scripted text cards on black backgrounds, announcing each scene along the lines of “Train pulling into a station” and “His Majesty The King inspects the troops on his birthday”.

Here, it was a case of the human and digital worlds combining forces through an effective hex invocation. The very act of talking up the marvels of digital media technology in public was enough to trigger the negative vibrations on the sub-atomic plane, waking up the electron devils who then provoked a situation to cause maximum embarrassment through the medium of irony.

However, in many cases, sod’s law has sod-all to do with it. More often than not, the great Lord Sod rarely needs to law down his rules: humans are perfectly capable of provoking their own cock-ups without recourse to divine intervention.

By way of example, and in the light of the recent bout of celebrity deaths, I thought I’d share the following video with you. It features two great music stars back in the 1980s when they weren’t yet dead. Although much of it is in unsubtitled French, concentrate on the English dialogue, as a young, fresh and innocent Whitney Houston is inexplicably sat next to a outrageously pissed and leery Serge Gainsbourg.

Gainsbourg died 25 years ago this week. Whitney Houston followed 21 years later, by which time she’d overtaken him in the intoxication stakes.

Today, we’d call this car-crash TV by design. The call of inevitability is deafening. But back then as the show was going on-air, I bet the TV executives who set it up were staring at the screen in horror and tutting: “Sacré bleu, ’oo’d ’ave guessed zat would ’appen?”

So it was with mixed emotions this week that I watched Apple’s lawyer Bruce Sewell, while giving testimony to US Congress, being forced to resort to reading his statement from printouts when his Apple iPad Pro appeared to let him down.

On one hand, I sympathise. How embarrassing it must have been for the poor bloke, given that he’s an Apple lawyer whose Apple kit has just gone tits-up in front of millions of viewers and live-text readers. On the other hand, I wonder what the hell he was thinking to have even considered using his iPad Pro in such a public way. Surely he must know about the electron devils’ love for irony?

That his iPad Pro should let him down was not unlucky. It was inevitable the moment he carried it into the committee room.

My suspicion, however, is that the tablet was working just fine. Similarly, the audio connectors at the Student Journalism Awards were almost certainly plugged in and functioning correctly. Lord Sod and his army of mischievous little buggers were simply bemused onlookers.

The real culprit is Wi-Fi.

For reasons known only to software developers and their evil overlords, all my apps seem to be constantly poking about online, polling distant servers who knows where and reporting back on who knows what. You only have to launch a program for it to immediately turn its back on you for 10 or more seconds while it pisses off somewhere into the ether, for no good reason.

This is just fine in a public space when you have a 3G or 4G connection; assuming by “just fine” you mean you are happy to have your half-gig monthly free allocation sucked up by apps that have no business doing so. The problem is when your device, unknown to you, automatically connects to a glitchy Wi-Fi router that happens to have the same name as one you used in a coffee shop.

The real culprit, then, is shit Wi-Fi.

Apple’s Music app is a favourite example in this respect. Even if you have disabled its insane and incompetent streaming service and chosen to transfer your MP3s to the device itself, Apple Music insists on looking for something on the internet before it will play anything. If your connection it glitchy, the app shows a blank screen and refuses to play at all, even though the songs are on the SSD. The only way to get the bloody thing to play is to switch to Airplane Mode. 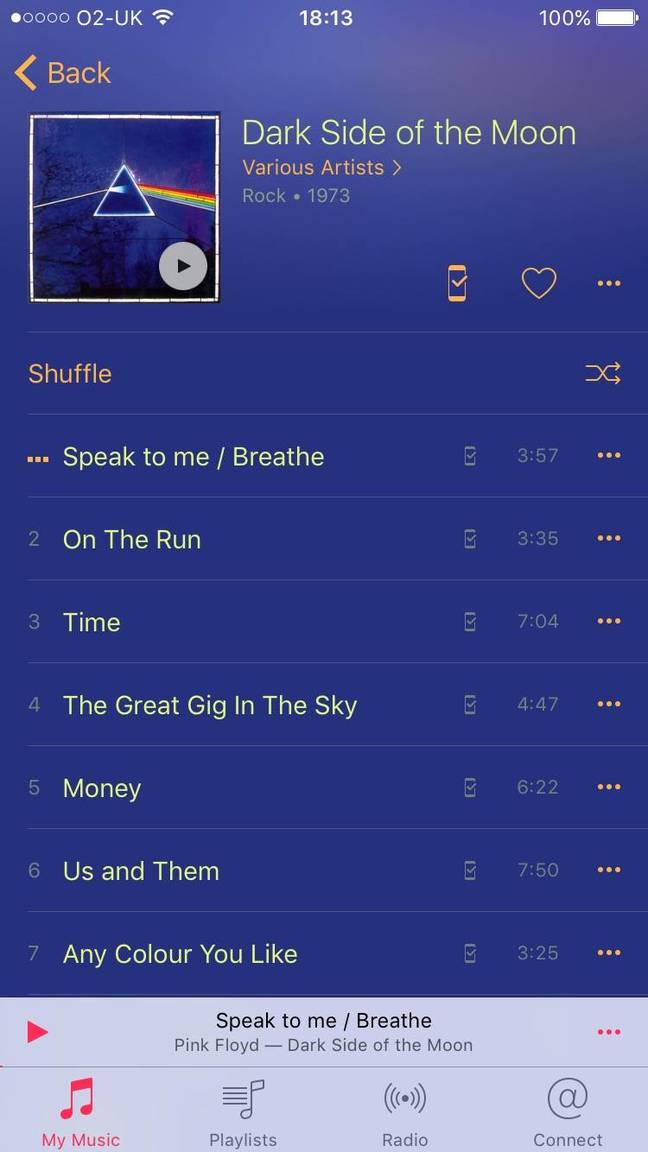 This is in addition to its random and unwanted re-interpretation of metadata. Apple Music has determined that Dark Side of The Moon is an album recorded by Various Artists.

Back to shit Wi-Fi, think about it: every business event you have ever been to has suffered from a Wi-Fi connection that was weak, slow and liable to drop out at two-minute intervals, yes? Think of all those IT conferences and tech exhibitions at which exhibitors and organisers, apparently lacking the appreciation of irony as enjoyed by their cross-dimensional adversaries, cheerfully apologise for the poor Wi-Fi provision as if it was out their remit.

It’s like when the already fragile public Wi-Fi at train stations dies altogether when cancellations are announced. I am told this is because it cannot withstand the rush of passengers trying to get online to find alternative travel times and routes or send messages to friends and family that they’ll be late.

In other words, train station Wi-Fi is not designed for people hoping to get on a train.

Now when I watch that video of Bruce Sewell, I don’t see an Apple lawman shafted in public by the laws of sod. Instead, I see someone whose tablet has automatically switched data from its own five-star, rock-solid 4G connection to a distant single-bar hotspot called ’HipsterWankCafe_FREE’, leaving his apps in turmoil in their attempt to send a constant stream of analytics back to the Illuminati.

This can only get worse so I plead to event organisers: get your Wi-Fi act in gear, because even software that doesn’t need to be online will try to go online anyway. It’s bad enough leaving it all to chance without actively inviting the internet devils to dance around your motherboards.

Otherwise, just do what you like: inevitability shall be the whole of sod’s law. ®

Aleister Dabbs is a freelance technology tart, juggling IT journalism, editorial training and digital publishing. Although it might be naive thinking on his part, he suspects that a lot of internet traffic is utterly unnecessary and getting in the way. Leaner software that stops idly reporting back to shadowy servers could lead to a leaner internet… ready for it to be filled with ten tons of crap produced by IoT devices over the next decade.