Flash is too fat. A glut of supply means growth is slower and slower

NAND flash industry revenue was $8.307bn in the fourth quarter of fiscal year 2015, five per cent less than a year ago and 2.3 per cent lower than in the third 2015 quarter.

Fourth-ranked Micron's flash revenues fell two per cent sequentially and three per cent annually to $1.154bn in that time. Its Q4 2015 market share was 13.9 per cent. 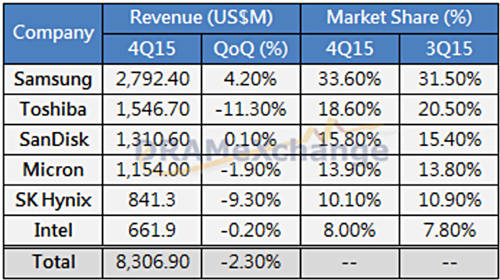 SK Hynix's flash revenues fell nine per cent sequentially and 16 per cent year-on-year to $841m, giving it a 10.1 per cent share of the market.

Intel, ranked sixth in the market, had a share of eight per cent.

Sean Yang, research director at DRAMeXchange, said: "Besides facing rapidly falling prices, the manufacturers have also reached a bottleneck in their process technology migration. Memory makers that are developing or producing 3D-NAND flash are encountering yield rate issues, with Samsung being the sole exception."

SK Hynix is building a new 3D NAND flash fab, costing about $12.5bn, at its Cheongju facility in Korea's North Chungcheong Province. Construction will start in 2018 with completion through 2019. ®