I am a millionaire. You're a selfish consumer. He's a filthy capitalist pig

Big Money has poisoned the utopia of the sharing economy, says the millionaire supermodel and “social entrepreneur” Lily Cole.

Once upon a time, unicorns grazed innocently over websites like Cole’s own Impossible.com, the “gift economy” website that was powered only by love (and a gift from taxpayers).

Contributors were happy to be give willingly and be paid only in hugs.

After the Cabinet Office creatively interpreted its guidelines to give Cole £200,000 for Impossible.com, an “innovation in giving” grant, she took the show on the road. Highlights included an ATM that printed wishes.

But the model, actress and philosopher, whose net worth was estimated at £7m, has realised that some people have become wealthy from doing what she exactly was doing.

“In reality it’s millions of people ‘sharing’ to produce a handful of billionaires,” she writes on her Medium blog.

“We have trillions of dollars of underutilized resources that need to be unlocked. The challenge of our generation is to get more out of every tomato, drill, mile of road, and hour of boredom.”

Cole says these shouldn’t be unlocked by “rental platforms” which (boo) take money, but by the authentic pioneers of the “real sharing economy” such as… herself.

Wait…. Buses? Have thousands of Routemasters been lying idle in private garages up and down the land, their bus enthusiast owners unable to put them to use? That must be what she means. And universities? All voluntary, apparently.

Cole also treats us to an extra lesson in economics. Impossible.com is saving civilisation, if not the planet itself. Literally.

“[Earth] can’t accommodate us all if we all consume resources like the Americans or British of today. We would need three planet Earths to support us… Jointly using what we have, sharing, is one of our best chances for survival.”

This isn’t actually true. Technological advances mean we now use less stuff to make more. We no longer need to chop down trees or kill whales for their blubber (once a vital fuel in Victorian times). GDP has risen, while the amount of stuff needed to make it has remained static or even fallen as Diane Coyle explained here (£). You could try and argue we’ve exported dirty work to emerging economies … until you see the figures for manufacturing-heavy Germany, where as GDP grew, the amount of stuff consumed to make it fell too. Opening access to underutilised resources via platforms like Uber may well, Coyle writes, create greater efficiencies. But Cole's objection appears to be that money changes hands, and money is the incentive that makes the platforms work.

Money and ownership both seem toxic to Lily Cole, but if our ancestors hadn’t invented credit, and property rights, then today we’d still be standing in fields pointing slack-jawed at aeroplanes. We’re the survivors of a “gift economy” that, fortunately, was abandoned centuries ago. ®

Money doesn't change hands (much) at Impossible.com, which may account for its failure. The Mail on Sunday reported that Impossible.com despite your generous taxpayer’s contribution is now £400,000 in debt. 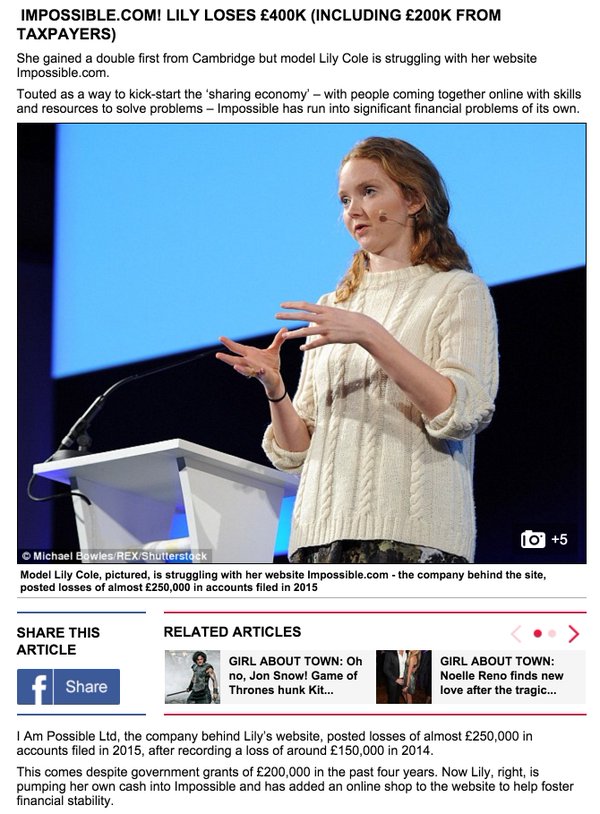 Privacy, it's a useful marketing term *Offer does not apply in China
Research19 Aug 2022 | 6