Cisco plans routers that are servers, or vice-versa, with KVM aboard

UCS E-series and ISR 4000 update due, NFV for SOHO kit on the roadmap 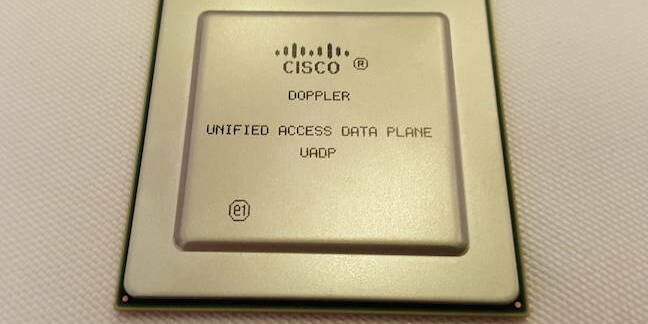 Cisco will shortly announce enhancements to its integrated service routers that will make it hard to know if they're a networking appliance or a server. Or a hybrid of both.

Cisco already offers the UCS E-series servers, small form factor machines that can plug into devices like the 4000-series integrated service routers. Cisco today recommends the combination as a way to host storage and run applications at the edge of networks, often in branch offices.

The Register understands that new releases in both ranges due in coming weeks will up the ante by including the KVM hypervisor.

The initial plan is to use the presence of the hypervisor to enable the enterprise network function virtualisation (NFV) ambitions articulated in Cisco's new Digital Network Architecture platform. That plan's seen Cisco build a GUI-driven virtual machine deployment tool that can do things like send a virtual firewall into a server or a device running Cisco's IOS that happens to have an x86 present, either as a clip-in server or perhaps in a more integrated design.

After that? Cisco's aware that having built a system to deploy VMs into x86 devices it finds itself with interesting opportunities to consider as a provider of methods to deliver business applications to the edge. Which is of course where the likes of OpenStack, VMware and Microsoft also see a role.

We're told by senior Cisco folk that one opportunity it will pursue is NFV for smaller businesses. Any announcement is at least three months distant, but the company will eventually reveal a refresh to its small business and SOHO networking kit that adds some NFV possibilities, with services and/or VMs delivered from the cloud.

We're told that Cisco is using “vanilla” KVM for now, but over time may consider some tweaks to optimise the hypervisor for its own purposes.

Cisco's top-level strategy here is to make networks easier to use and more dynamic. The company's seen cloud and virtualisation hit and understands that users are no longer content to order a physical firewall, wait for its transportation through meatspace and then spend time configuring it. NFV is the company's response: by enabling software-driven deployment of network services, Cisco reckons users will keep buying its stuff in software form. And also buying the orchestration tools needed to make it happen from Cisco.