What’s the point of pouring billions into developing Android every year if users get the code years later? If you were a Google engineer, you could be forgiven for thinking you were on a desert island posting messages in a bottle.

According to the latest figures from Google, the 2014 version of Android (Lollipop) has finally overtaken the 2013 version (KitKat). And it’s 2016.

The trend is towards entropy. Last year’s version 6.0 release Marshmallow has been available for OEMs to ship for six months, but barely registers: only 2.3 per cent of Android devices run 6.0. 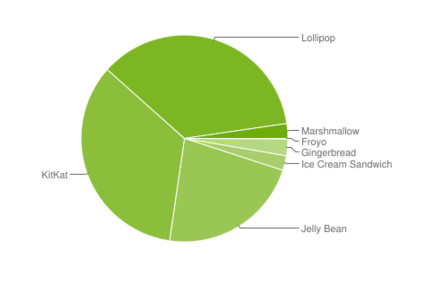 Part of the reason for that is Google’s own fault, as many devices are not upgradable to 6.0, veteran analyst Richard Windsor points out:

“As a result of most devices not being upgradeable, I can only conclude that Lollipop is growing because handset makers are still shipping new devices with the older code... This is bad news because all of the improvements and innovations that Google announced nearly a year ago are benefiting only a fraction of its user base. This leaves the vast majority with an inferior user experience which results in less traffic and lower revenues to Google.”

Windsor has warned that unless Google can regain control of Android distribution, and speed things up, it puts the entire business at risk.

By contrast, Apple’s control over the chain means it can upgrade the installed base of one billion iOS much faster. iOS 9 was made available in mid-September 2015, and in three months, was up and running on more than three out of four iPhones.

Windsor thinks Google will ramp up its own presence as an OEM and grab control of OTA updates. This needs buy-in from carriers, though. Expect major changes to the model with Android 8.0 next year. ®