HPE’s StorServ filer is very speedy. So for best $/IOPS, get a DataCore

Speed, price, efficiency: You can have any two

The SPC-1 benchmark looks at a storage array's transactional performance, and enables an independent and objective comparison to be made of different suppliers' systems, be they external arrays or virtual arrays built by virtualising a bunch of servers and their directly-attached storage.

The cost of the benchmarked 8450 system was $126,558.24, the lowest cost of all the top ten systems, including the DataCore Parallel Server which cost $136,759 and scored slightly more than 1.5 million IOPS. 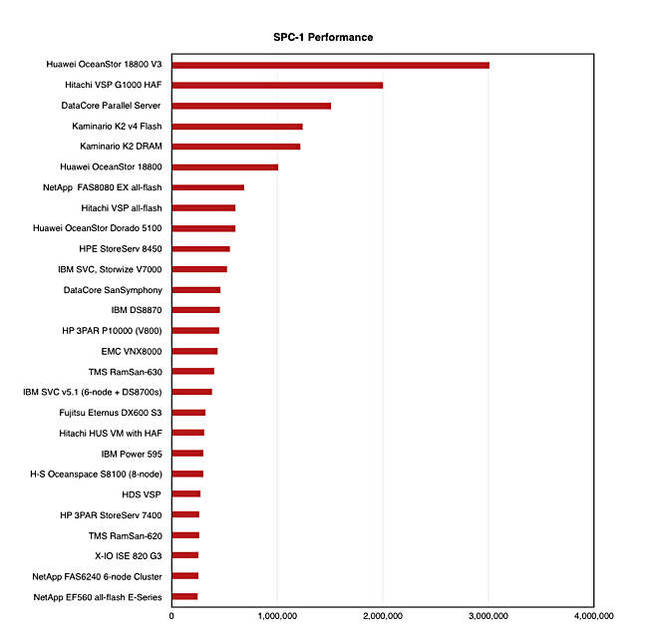 He declares that the “HPE 3PAR StoreServ is THE dark horse within the all flash segment,” – but he would, wouldn’t he. And he also declares: “The HPE 3PAR StoreServ 8450 achieved a world-leading result for SPC-1 $/IOPS – the leading external all flash array on the planet based on SPC-1 Price Performance $ per IOPS.”

DataCore’s software-defined storage running on Lenovo servers is not included in his definition of external storage arrays, yet the two DataCore/Lenovo results show that a system using the two suppliers’ products can, in SPC-1 terms, do what the 8450 does and do it better. 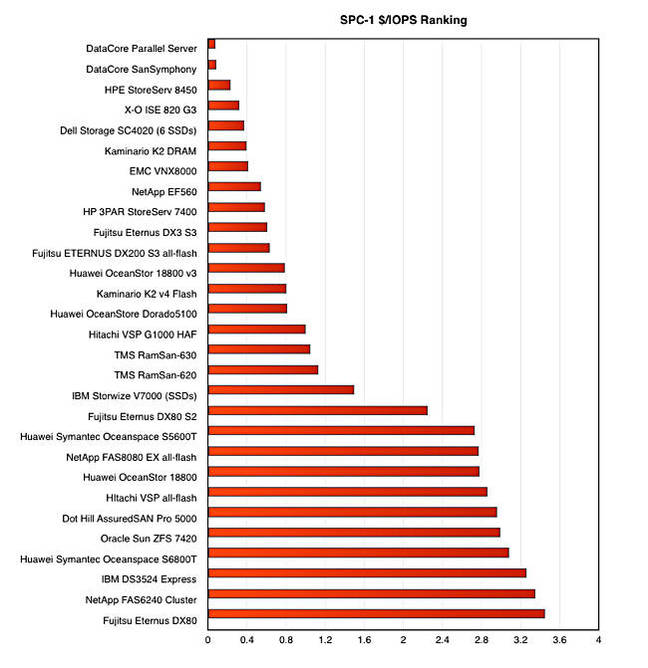 Haverfield praises the 8450’s efficiency, saying: “While achieving the 545,164 SPC-1 IOPS the system was almost 97 per cent full. That’s right – only 3.07 per cent free space at peak performance. No wasted flash.”

And he pushes its affordability as well. “The 3PAR StoreServ 8450 proved to be the most affordable in SPC-1 Price Performance terms amongst ALL of the external arrays including all flash arrays with results.” (He puts Daracore/Lenovo aside once again.) Read the rest of his blog; he makes interesting points.

There is a lot of SPC benchmark activity going on, with DataCore, HPE, and Huawei being major players. Interesting times as disk spindle counts count in SPC-2 runs, and all-flash and parallel IO duke it out in the SPC-1 area. ®