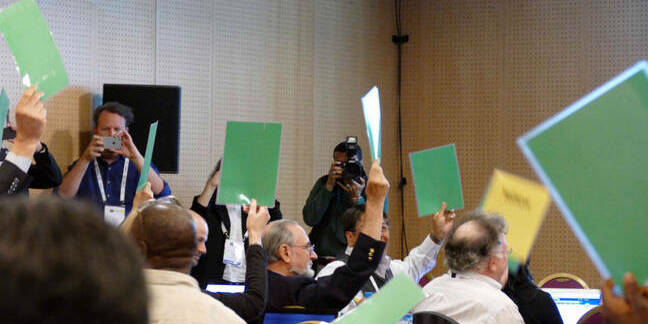 Delegates at the country code name supporting organization approve the plan. One of six groups to do so. Photo: Sam Dickinson

A plan to end US government control of the top level of the internet was formally approved Wednesday when six different internet groups voted to send it on to the board of DNS overseer ICANN.

Gathering at an ICANN meeting in Marrakesh, and after two years of work on the plan to transition control of the IANA contract to ICANN itself, members of the six groups which represent governments, business, the companies and organizations that make up the internet's core infrastructure, and individual internet users all agreed in separate votes to approve the plan.

The plan will now move on to the board of ICANN, which will then forward it to the US Department of Commerce for evaluation.

After evaluation, the plan will be handed to Congress and ultimately to the President for approval. The goal is to formally hand over IANA when the current contract ends on 30 September.

Although there was unanimous approval by ICANN's supporting organization and advisory committees, there were a number of abstentions, and the critical issue over what role and influence the world's governments will have once the US government steps away from its role remains unsettled.

The powerful Governmental Advisory Committee (GAC) was unable to reach consensus on a critical recommendation about what the board of ICANN's obligations are when it comes to formal GAC "advice."

GAC advice will require "full consensus," meaning that no one government actively objects, whereas currently a "very small" number of countries are allowed to object and it is still regarded as formal advice.

When that advice is received, there would now need to be a 60 per cent vote in favor of rejecting that advice at the ICANN board level, where previously it was two-thirds. Pragmatically, the difference is one board member's vote out of 20.

This recommendation was designed to limit some people's fears that governments would try to impose more control over ICANN, and hence IANA. It was opposed by 16 governments including Argentina, Brazil, France, Portugal and Russia.