Next-gen LTE is making a monkey out of Wi-Fi

US consumers love to moan about their internet providers, but in reality they enjoy superior LTE speeds to Europe. A vendor’s global survey of mobile broadband performance highlights some intriguing trends - and tips India to leapfrog into the future.

For years the US was a poor relation of Europe when it came to mobile. Europe had spearheaded the mobile transition from analog to (2G) digital. But Old World’s lead was temporary. Apple’s iPhone helped unleash an avalanche of investment in data-capable ready networks Stateside, while Europe’s carriers remained saddled with huge debts from the 3G licence auctions.

Today LTE is significantly faster in the US than Europe - from 13 to 35 per cent faster, according to the survey. The survey was conducted by Twin Prime, a Redwood City, California-based network data optimisation company that boasts pundit Om Malik, now a VC, as a director and investor. Twin Prime founder Kartik Chandrayana led R&D teams at Cisco and BlueCoat, It’s based on billions of requests on “billions” of network requests from over 150 countries. 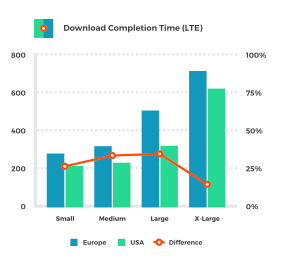 Is there a catch? Yes: speed isn’t everything, and US mobile data networks are less responsive than Europe’s, showing higher latencies. That’s down to higher population density and a better build-out of 3G/HSPA+ in Europe, which the US was able to skip in the race to 4G. The gap is closing though.

“Geography and population density will always pose a challenge in the US vs. the EU, advancements in network technologies will continue to bridge the gap in response times and overall network performance,” Twin Prime notes.

The data threw up some other surprises.

On average, Wi-Fi isn’t faster than LTE. And LTE is more predictable than Wi-Fi, something that can’t be said for 3G networks. The survey data showed a lower variability for LTE and HSPA (“3.5G”) data performance than for Wi-Fi.

The moral: if you can skip a generation of network technology and focus your investors on the next one, you can steal a competitive lead. ®

A few downsides: no voice, for starters