Initial release of engine to work on at least four websites. Success?

Mozilla is planning an initial release of its new Servo-based new web browser engine in June, according to a post on the developer mailing list by research engineer Paul Rouget. 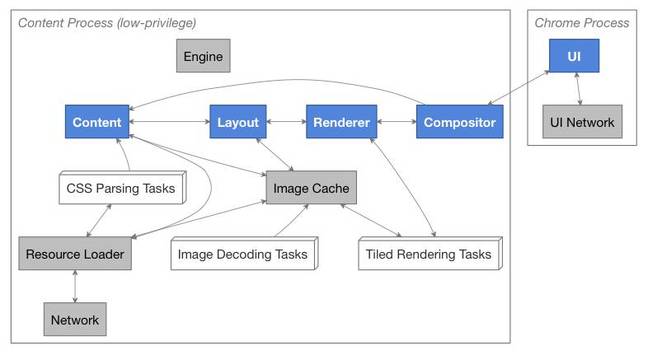 How Servo's parts link up inside

"Release" in this context does not suggest a production-ready download, but rather an early preview.

Rouget states his wish for Servo "to be capable of running github, duckduckgo, hackernews and reddit," adding that "we're close, but there are still several rendering and functional issue for each of these websites."

Servo is a cross-platform browser engine that will run on ARM operating systems (including Android) as well as on x64 platforms including Linux, OS X and Windows. It is designed to take advantage of parallelism in order to achieve optimum performance on today's multi-core systems.

Servo is coded in Rust, a language designed to ensure thread-safe concurrency and with a greater emphasis on security and safety than C++ – a language Mozilla says is poorly suited to preventing problems like memory bugs and data races.

Servo is intended to be used in Firefox, but the project also includes a new web browser confusingly called Browser.html. This project implements the browser itself in HTML, and uses a runtime called Graphene for building native applications in HTML. A further twist is that you can build Browser.html using Gecko, the existing browser engine in Firefox, as an alternative to using Servo.

The long term plan is to "incrementally replace components in Gecko with ones written in Rust and shared with Servo," according to the Roadmap, so that eventually Gecko and Servo may be almost the same thing. The process of incorporating Rust-based components into Gecko is dubbed Oxidation.

A third key component of a web browser is the JavaScript engine, for which Servo uses SpiderMonkey, the same as Firefox. ®