It was Edward Snowden's email account the FBI was targeting in its extraordinary legal case against Lavabit, we can now confirm.

Lavabit ran an encrypted email service that Edward Snowden was thought to have used in 2013 to contact journalists about the top-secret NSA files he had in his possession.

In documents published earlier today, hundreds of pages of previously sealed material related to the Feds' battle with Lavabit were made available. It was immediately noticeable that there were huge swathes of redactions, most of them covering the email address and details of the individual the agents were specifically looking for and why.

It has long been rumored or assumed, though never officially confirmed, that it was Snowden's account that was under scrutiny, particularly given the timing of the case: the documents were filed against Lavabit soon after Snowden said he was the source of the NSA PRISM leaks.

But no one has ever been willing to confirm it, and the huge redactions in the documents made it clear that the FBI was determined to keep up the pretense.

They missed a single reference. One of the first things we did on downloading the 560‑pages [PDF] was run a search on the word "Snowden" and lo and behold – on page 79, while noting that the entire record was under seal, up pops the email address "Ed_Snowden@lavabit.com."

As you can see from another page in the release, the redactions came thick and fast in relation to any mention of the NSA whistleblower, so the failure to notice a single reference to his email address is likely to cause some frustration in the FBI. 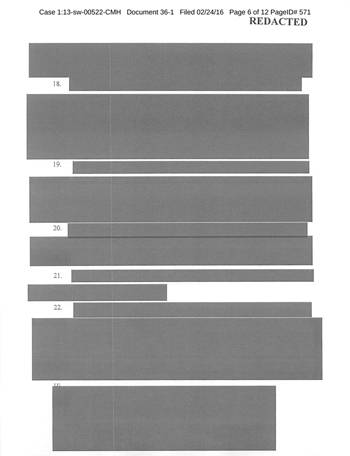 Quite why the FBI and US government have been so determined to hide the fact they were pursuing Lavabit over Snowden has never been adequately explained, but now it is finally out there.

In the case, federal investigators insisted on being given the private keys and source code to the Lavabit encryption engine so that they could access and read all emails without the individuals in question being aware of their actions.

Lavabit founder Ladar Levison fought and lost the order, was found in contempt, and told to pay a fine of $5,000 per day until he handed over the private keys. Two days later he did so and then promptly and publicly shut the entire service down.

Levison later claimed that the Feds changed tactic after that and ordered other email providers to both hand over their keys and keep services running so they were able to snoop on people's communications. ®