Something useful from Cupertino?! Apple sees the light – finally

It may be true that Apple has moved from a genuinely innovative company to one that iterates its bestsellers, but one of those updates will leave many people happy.

Speaking at the iPhone SE launch on Monday, two Apple executives outlined two different ways that the company has started to consider light in its products.

The first is Night Shift. It is available in iOS 9.3, the latest update of Apple's mobile operating system, which is released today and, simply put, adjusts the screen to the time of day.

There is increasing amounts of evidence that the screen color of mobile devices – especially the degree of blue light – has been impairing people's sleep, since they read their phone or tablet late at night. Put simply, artificial light can trigger our brains in ways that keep us awake and prevent the release of sleep-inducing hormones.

It may sound silly but it is a serious issue. Poor sleep can have significant negative impacts on people's health, including obesity, heart disease, strokes and depression. Serious doctors writing in serious journals have started to worry about the impact across society.

Apple's solution is a feature in which your device accounts for both its clock and your geo-location to discern what time it is for you. When it hits sunset, it reduces the level of blue light in response. The result is a warmer color in the screen. In the morning, it shifts back to more blue.

This is of course not the first time this had been possible: there are apps for just about every device – including Apple devices – that will do this for you. F.lux for PCs is very popular. Twilight on Android devices is among around 10 apps that will do the same. But this is, we believe, the first time it has been written into a product's main software, and it's just going to show how wonderful Apple's App Store is at providing free research and market development for Cupertino.

And now one for designers

It's not a huge difference, but it's one of the very nice additional thoughts that Apple tends to excel at, which is why people pay a premium for its products. 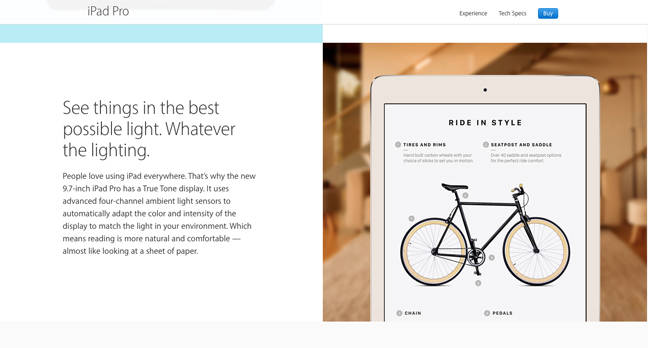 At the other end of the light consideration comes a new "True Tone" display on the smaller iPad Pro (sadly, not the larger 12.9-inch screen yet).

The new 9.7-inch iPad Pro includes four-channel ambient light sensors that measure the color temperature and the intensity of the light surrounding the device and adjust the screen according.

Unless you are a designer, artist or publisher, you may not have noticed that how you see and perceive color changes hugely depending on the light surrounding you (think Monet and his paintings of haystacks). So a bright white in one setting such as indoors with fluorescent light may look a sort of decaying yellow when outside or in a room with a lot of natural light. Of course, you may have noticed and not really cared.

But it is a huge deal for designers who work to achieve specific colors, and for a very long time companies have worked to ensure that screens show the "right" color. There is also a huge industry in designating specific colors for printing so that the color you wanted to appear is the same one that appears when something is physically printed.

Apple's approach starts taking the reality of the digital printed form seriously, and it will be big news for designers and advertisers who want their work to be seen as intended. For everyone else, the screen will just look much nicer and the iPad itself will feel less like an electronic device and more like a book.

And it is that small but significant difference that will take us all into the future – where electronic products feel less jarring and more welcoming. Apple has seen the light.

Of course, the reality with True Tone at the moment is that it is only available in one, very expensive product. The iPad Pro 9.7-inch starts at $599 but that's only at the – frankly useless – 32GB size.

In reality, you are looking at $749 for the 128GB. Plus of course if you are buying a high-end iPad you will almost certainly want to use a keyboard and/or the stylus (the Pencil). So in reality you are looking at a minimum of $1,000 before you get a device that can provide realistic colors.

For now, it will be the preserve of professionals with too much money. But it will filter down over time. As for Night Shift – assuming you've already splashed out for anything beyond an iPhone 5, it will be free in iOS 9.3. ®