Three months before EMC bought DSSD in May 2014, the storage goliath was thinking about buying Pure Storage. EMC even admitted in emails that its rival would always win out in head-to-head proof-of-concept de-dupe battles.

This is according to internal emails disclosed during EMC's patent infringement lawsuit against Pure Storage and obtained by The Register. That lawsuit rumbled to a halt this month with a small judgment against the upstart. Pure plans to appeal against the verdict.

Let's wind back the clock and build a timeline of events.

The rivalry with Pure Storage became bitter, with EMC accusing Pure of poaching its staff in October 2013. The next month, EMC accused Pure of ripping off its deduplication and RAID patents.

This action may have been triggered by Pure winning bids against EMC's XtremIO product due to Pure’s data-reduction technology.

Three months on, in February 2014, EMC's senior veep of primary storage Michael Wing sent an email to other EMC execs, saying: "Bottom line is, if we want to dominate this massive move towards all flash, we likely have to acquire [Pure Storage] as we've discussed and it becomes our mid-tier flash solution and ExtremIO is our enterprise class version.”

This implies some bosses within EMC thought Pure's systems would make a good acquisition target as they were perfect for the mid-tier. However, Wing's point of view was disregarded, as EMC subsequently bought DSSD and its structured-data rack-scale flash technology for $1bn in May 2014.

This was a development project; a product was not launched until almost two years later in February 2016.

One of Wing’s correspondents in the email chain, Josh Goldstein, veep of marketing and product management for XtremIO, thought Pure’s proof-of-concept expertise was much better than EMC’s, and that Pure’s data reduction superiority was a key part of that: 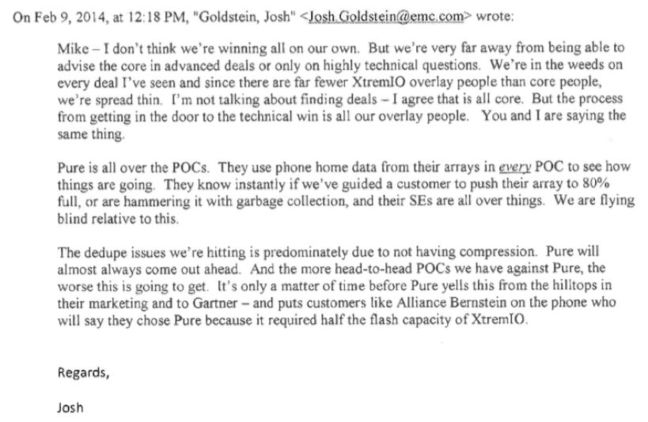 Wing was also concerned about the impact of Pure’s Forever Flash program and components like free controller upgrades:

Pure powered on while XtremIO started pulling back lost ground. In July 2014, Wing was still worried about Pure’s ability to beat EMC in sales by relegating XtremIO to an also-ran technology, brought out when Pure had beaten VNX or VMAX disk arrays in deals. 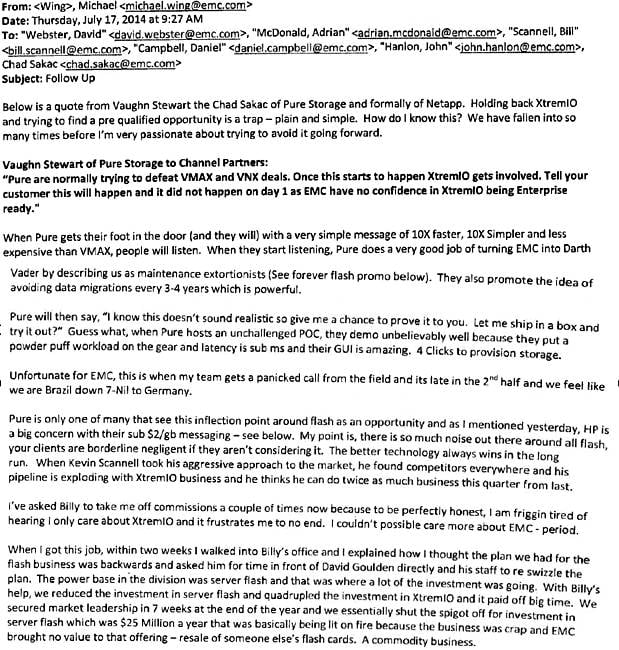 HP was also mentioned as a concern with its then sub-$2/GB pricing. (Billy in the above email is Bill Scannell, president of global sales and customer operations at EMC.)

Wing thought that Pure had an advantage over EMC because XtremIO Xbricks were costly for database workloads, with a 10TB X-brick being $27/GB. The answer was to focus XtremIO on VDI workloads, win there and then move into adjacent markets. That tactic worked well, but Wing raised the spectre of EMC suffering from a Blackberry moment: 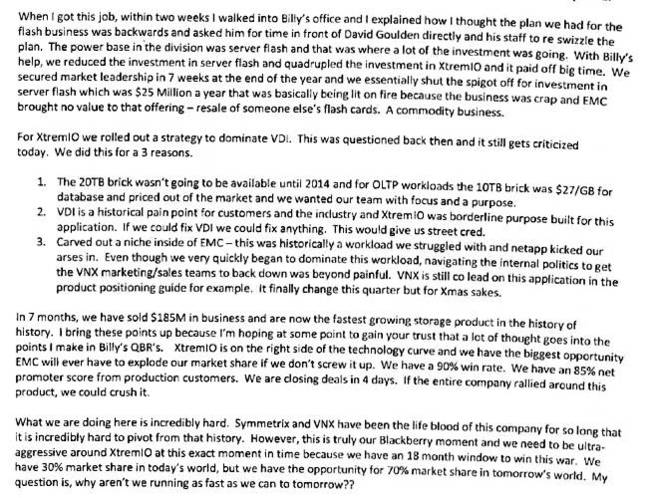 He wrote: ”This is truly our BlackBerry moment and we need to be ultra aggressive around XtremIO at this exact moment because we have an 18-month window to win this war ... We have 30 per cent market share in today's world, but we have the opportunity for 70 per cent market share in tomorrow's world. My question is, why aren't we running as fast as we can to tomorrow?”

It was a bit of an overstatement, as EMC wasn't facing the risk of a $6bn loss and Wing was dramatizing the situation.

Ultimately, EMC's board and CEO decided to solve the big where-does-EMC-go-in-the-future problem by looking elsewhere. In any event, they decided the best way to fix the issue was by selling out to Dell for $67bn in October 2015. 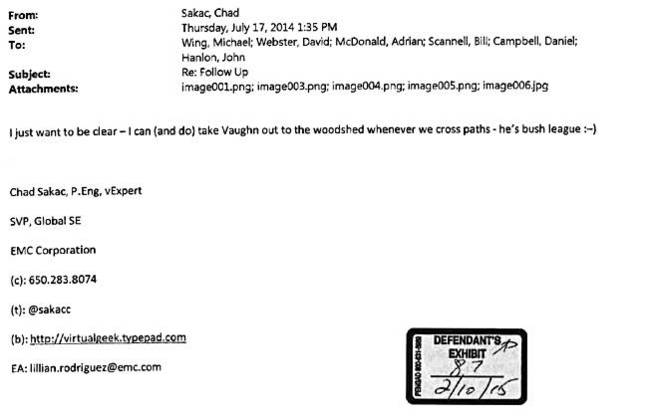 Stewart had been described by Wing as Pure’s Chad Sakac, and Sakac, now president of EMC's converged systems unit, was energetic in dissing Stewart. Taking someone “out to the woodshed” is a US expression meaning to give someone a thorough beating with “bush league” meaning pitiful, poor, terrible, awful, bad, sucky. Be nice, Chad.

Asked about these emails and the issues that surfaced in them, an EMC spokesperson told us: "Old emails. Things turned out quite well for XtremIO." It has become, after all, a near-$2bn run-rate business for EMC.

Since this period in 2014, Pure has gone from strength to strength, passing through an IPO, updating its product range, and has recently launched its own potentially rack-scale flash product for unstructured data, FlashBlade. The post-IPO Pure Storage with its $2.5bn market capitalisation would cost a lot to buy, even if Dell-EMC had the will and the financial firepower to do so. ®

Industry insists it needs new blood, yet offers are being rescinded, pay rises delayed, and workers are furious
On-Prem5 Oct 2022 | 1