DDN has updated its scale-out/up filer GS12K array to the GS14K, saying it's the industry's fastest and most flexible scale-out filer.

A companion EXAScaler product line uses Lustre instead of GPFS. So the ES7K (ES7000) is effectively the GS7K with GPFS replaced by Lustre.

Earlier generations of the GRIDScaler line included the GS7K, with WOS (Web Object Scaler) back end storage, introduced in October 2014, and GS12, based on the SFA12K/12KX array technology. 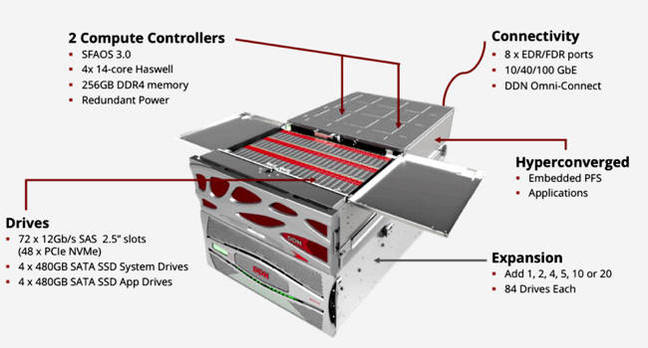 The 14000 (14K) term indicates it uses SFA14K array technology, with dual active:active controllers first introduced in 2015. The base unit tales up 4U of rack space.

DDN does not specify the SSD capacities and speeds available. It says the system has an open architecture to speed the adoption of newer technology, such as EDR InfiniBand, Omni-Connect and NVMe SSDs

Its basic specs specs are:- 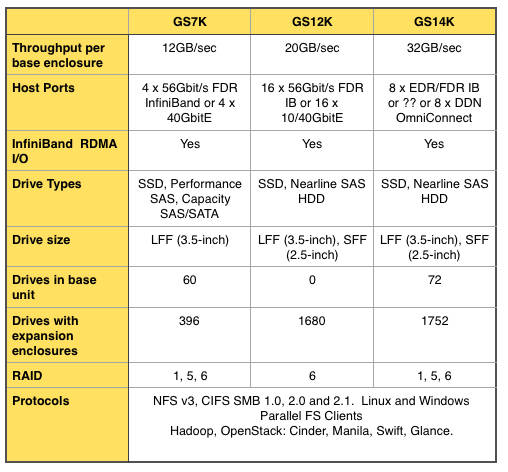 56Gbit/sec InfiniBand is four Fourteen Data Rate (FDR) links, each running at 14.0625Gbit/s. EDR stands for Enhanced Data Rate and each link runs at 25.78125Gbit/s. DDN doesn't say how many links are used with the GS14K. If it is four, then each EDR port runs at around 103Gbit/s.

It supports NFS and CIFS/SMB and a NAS Client. There is an optional IME burst buffer for more extreme data IO rates.

View the GS14K as being at the top of the filer performance and capacity tree, with a design history rooted in super- and high-performance computing where arrays have to provide parallel access to data by thousands of CPU cores. Two thirds of the Top 500 super-computing sites use DDN arrays.

This style of array is now finding a home in enterprises with commercial HPC-style requirements, the same market that Pure Storage's FlashBlade product has been, and is being, developed for. 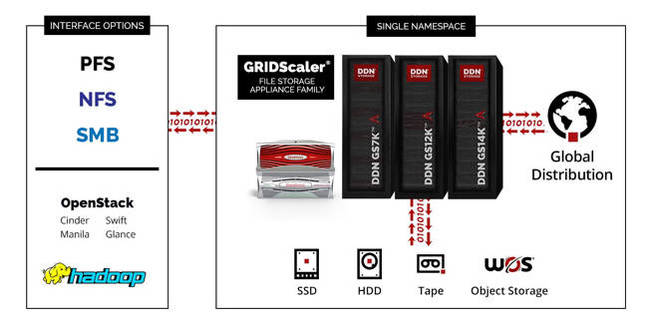 We would be interested in exploring the similarities and differences between an all-flash GS14K and Pure Storage’s newly-introduced FlashBlade, which has data reduction technology built in and uses proprietary FlashBlade modules instead of SSDs.

GS14K configurations start at under 100 TB and 3GB/sec of performance, scale to 32GB/s in 4U, and to over 350GB/sec per rack. Capacity scales to scales to 7PB/Rack and 14PB per appliance. DDN says multiple systems support over 1TB/sec and dozens of Petabytes of capacity. The GS14K is generally available now. Pricing is not available. ®