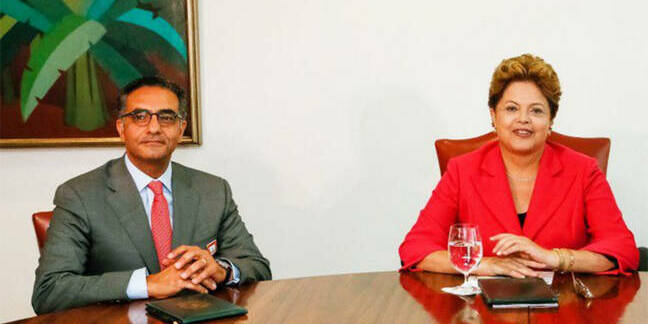 Analysis Everyone wants to leave their job on a high, but so few manage it.

One of those who tried so hard is Fadi Chehade, CEO of domain-name system overseer ICANN, who vacated the top role earlier this month. He has left a bit of a stink behind, thanks to his courting of the repressive Chinese government and disgraced Brazilian president Dilma Rousseff.

Chehade timed his exit to emerge shining. He told ICANN's board last May that he wanted to leave his contract 10 months early.

It came as a surprise both to the board – which had extended his contract with a very healthy bump in pay – and to the broader internet community, which expected him to stay with the organization as it transitioned away from the US government.

At the time, the expectation was that Uncle Sam's critical IANA contract would already have been handed over to ICANN, but Chehade no doubt calculated that even with delays, he would be able to leave when the agreement was effectively done.

He was right – just. At the organization's meeting in Marrakesh earlier this month, the internet community finally agreed on a plan and sent it to the US government for review. Chehade gets to claim credit for managing the critical process but, as a distinct bonus, doesn't have to deal with the tedious and thankless task of actually making the changes that will result.

That glorious exit has been marred by two things, though.

The first is Chehade's decision to closely align himself with the Chinese government and its World Internet Forum.

The internet community was stunned when Chehade announced on stage in December that he would head up the conference's "high-level advisory committee" that would guide the agenda of future conferences and "contribute ideas for the development of the internet."

He then gave a nauseating ingratiating interview with the conference organizers (the Chinese government) in which he praised "what great things can come out of China" and told the interviewer: "We all need to give a big hug to China. And China typically hugs back."

Chehade was exactly the sort of person the Chinese government was seeking to lend credibility to its efforts to influence internet governance discussions, and the decision left observers wondering whether he was being naïve or reckless.

This also led to an angry letter from several US Congressmen – including Republican presidential hopeful Ted Cruz – asking Chehade to explain himself and suggesting he had become complicit in Chinese online censorship.

And it led to what we understand was a heated discussion by the ICANN board in which they considered publicly rebuking Chehade but, in typical style, decided instead to issue a bland statement in support.

If leaving a largely open beacon of free speech for a closed group run by an oppressive regime wasn't enough, Chehade then used his last day in office to send a letter the one other big figure he met while in his role as ICANN CEO – Brazilian president Dilma Rousseff.

Chehade met Rousseff shortly after the Edward Snowden revelations about US mass surveillance; Rousseff was furious at her mobile phone and email being intercepted by the NSA.

Chehade used it as an opportunity to ingratiate himself in high circles of power, claiming in one interview to have waited outside her office for three days seeking a meeting. Other reports have it that Chehade was connected to Rousseff by US administration officials in order to effect backdoor diplomacy.

Whatever the truth, Chehade took another controversial decision, which his board again held a heated meeting over and again considered rebuking him – but instead provided a bland message in support.

Things become all the more bizarre when the ICANN board claimed to have given Chehade permission to have the meeting with Rousseff and approve the vast expense that became the NetMundial conference beforehand. The board resolution over that approval only appeared after the fact however, with no mention of the subject previously (the delay was put down to vague reasons of confidentiality).

In truth, no one believes the board didn't approve Chehade's actions until after the fact and then backdate a resolution to save face.

As to his letter [PDF] to Rousseff, Chehade writes: "This is my last official letter of my my [sic] tenure ... I choose to address it to you because our partnership, which started on 10 October 2013, shall be remembered as a key turning point in digital geopolitics," including a picture of himself and Rousseff presumably in an effort to remind her who he is. "As I move on from ICANN, I look forward to working closely with Brazil to further strengthen the global digital governance system."

The truth is that the meeting was only really significant for Chehade and his hopes of climbing the poles of power.

Rousseff used the NetMundial conference as a way to sign the country's net neutrality legislation into law and to boost her popularity among young voters ahead of a critical election, which she subsequently won.

The NetMundial conference itself was a washout. Its resulting document rather blandly reiterated the internet governance community's general philosophy and has been completely ignored by institutions such as the United Nations and its Internet Governance Forum.

A personal effort, led by Chehade, to turn NetMundial into a permanent organization called the NetMundial Initiative (NMI) was a miserable failure, with the internet community publicly denouncing it.

Despite over $600,000 being plugged into it by ICANN, the Brazilian government, and the World Economic Forum, in 12 months it has achieved nothing but a page of mission statements.

At the most recent meeting on the NMI's council, US government representative Larry Strickling repeatedly suggested the entire organization be shut down.

As for Rousseff, she has been embroiled in a corruption scandal that threatens to bring down the Brazilian government. In the past week, she attempted to place her predecessor in her cabinet in order to help him avoid prosecution – a move that was squashed by a Supreme Court judge.

On Monday, a poll revealed that 68 per cent of Brazilians think she should be impeached. On Tuesday, she resisted calls for her to resign.

Chehade also left the internet community with his own letter [PDF] in which he touted his success and argued for how the organization should move forward.

The letter didn't go down well, with government representatives taking exception to his portrayal of their views. Just this week, the Internet Infrastructure Coalition sent its own letter to ICANN's board complaining about its contents, particularly Chehade's suggestion that ICANN involve itself more in the field of intellectual property (IP).

"President Chehadé's statement that ICANN 'must remain engaged, and ... shape the discussion and debate' is concerning to our member companies, which worry that a more aggressive role by ICANN will lead towards moderating content online. ICANN cannot fabricate an instrumental role for itself within IP matters," the letter [PDF] states.

"Statements that move the organization into a role it was not created for and that curtails the effectiveness of its existing processes are concerning and reflect a step back from the achievements of the organization under President Chehadé."

In short, it has been an inglorious end to possibly the best CEO that the organization has had: an inclusive and driven leader undermined at the end by personal ambition and poor judgement.

That said, it is a step up from his predecessor. Rod Beckstrom left the organization under a cloud, railing against the organization and its board and with internet community members muttering "good riddance" under their breath at his leaving. ®