Who hasn't been tweeted a semen-covered pic of themselves? 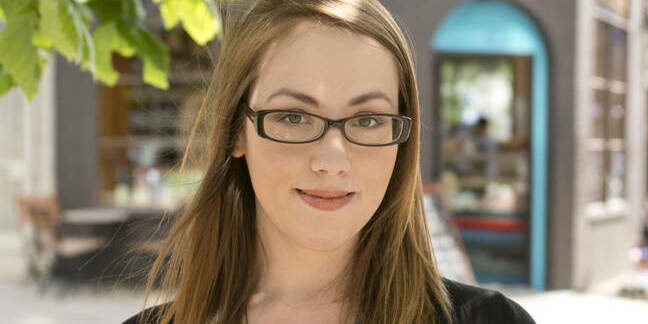 Holly Brockwell ... Making a big fuss about nothing. Typical woman

In yet another baseless attack on tech journalism, a woman has complained about supposed sexism in the field.

Holly Brockwell – editor of Gadgette, a virulently pro-woman and so therefore anti-man tech website – has written a blog post claiming to give insights into "what it's really like to be a female tech journalist."

Brockwell then goes on to complain about harassment, highlighting an app that lets people "buy" others' Twitter profiles, and then regales how she then harassed the (male) CEO of the company by quizzing him about the fact her profile had been "bought" and she'd then been contacted to inform her of her owned status.

The poor bloke felt he had no choice but to shut up shop under Brockwell's barrage – an event she joyfully retells in her piece.

"As a result of my concerns and the response to the article, the app was pulled by its creator," she gloats. "That wasn't my decision, but the internet decided it was definitely my fault. In amongst the usual 'censorship' rage and recommendations to kill myself was a photo. Of my Twitter avatar. Covered in sperm."

This is where things turn really ridiculous as she relates the incident. "It wasn't a Photoshop. He'd brought up my photo on his monitor, and he'd violated it."

Brockwell claims this is a sign of rampant sexism but, come on, who hasn't at some point received a photo of their face covered in ejaculate?

Things get increasingly ridiculous from there. She relates how she's been told women don't know anything about technology, and told how her propaganda-filled estrogen-pumping website (example headline: "Subaru's new Impreza is all about the tech") wouldn't work because "no one wants to advertise to women."

Well, of course they want to advertise to women! Just not these gender-anxious articles about, get this, a "smartphone-powered 3D printer" that cost £70. Women are more than a just a bundle of hormones and soft sweaters! Something Brockwell would do well to remember. Just because you have 150,000 readers a month doesn't mean you can pigeonhole them.

In another example of this supposed sexism, she then recalls that when at a tech tradeshow, she was asked to flash her breasts if she wanted to see a new smartwatch. Well, of course she was! Because men don't actually have breasts do they? You'd think she would have noticed that by now. This reporter has lost track of the number of times he's been asked to flash a bit of skin to get the tech specs on the latest product release.

Brockwell then has the audacity to complain about being sent press releases about pink gadgets and sex toys, as well as childrenswear, "because, of course, a site for women can't just be about tech."

Maybe, just maybe, if she wrote more about sex toys and pink stuff – or is Samsung's "LaFleur" SGH-E570 beneath you? – and less about Uber or animation software or smart doorbells, she wouldn't have to deal with unwanted press releases.

Let's be quite clear here – it's not just women that get sent press releases that aren't suitable. Looking in this reporter's inbox, there is an email from O'Reilly talking about hardware – and I don't even cover hardware! That's another colleague's job and I had to forward the email to him.

Here's another: some company called AV Stumpfl celebrating its "Best Workplace" award. And another: Sanuwave offering an interview for their wound-fixing technology.

I bet if Brockwell received a press release covering "non-invasive treatment for chronic wounds and other conditions that stem from tissues to insufficient blood flow," she'd think it was a veiled reference to menstruation. Well not everything is about your vagina, sweetheart!

Apparently this so-called sexism "infuriates" Brockwell to the point where she complains that her male colleagues don't call out things such as blatantly sexist smartphone ads. But that's not their job – that's your job! And don't complain when you get blacklisted for it because, as you yourself note, you are being branded "a difficult feminist" for doing so.

Instead of getting the message, Brockwell even prides herself on the fact she doesn't just shut up about these things. "I've spoken out again and again," she writes.

It's exactly this kind of behavior that gives women journalists a bad name. So here's our message for Holly Brockwell: why don't you just calm the hell up and leave tech journalism to the people who fail to notice sexism, no matter how rampant or pervasive? ®