Amazon WorkSpaces two years on: Are we ready for cloud-hosted Windows desktops?

We wrap our claws around AWS's PCs-as-a-service 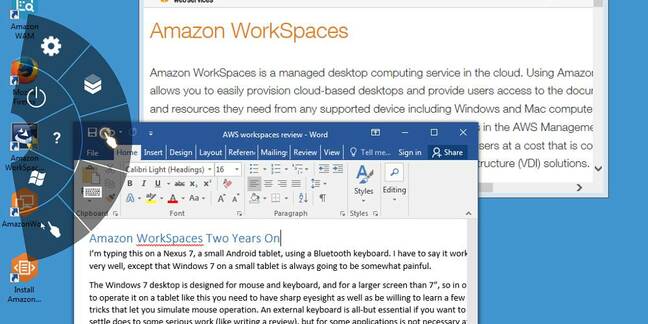 Amazon WorkSpaces on an Apple iPad

We took an early look, but encountered several niggling problems. "Don't dive in: it will get better," was my conclusion.

It is time for another hands-on, but first a quick recap. WorkSpaces provides a Windows desktop on Amazon's cloud. There are three specification levels:

In addition, you can pay $15.00 extra per month for Microsoft Office Professional, or you can save $4.00 if you bring your own Windows 7 desktop license. There are clients for Mac, Windows, iOS, Android and Chromebook; other operating systems such as Windows Phone and Linux are not supported. Standard Windows RDP clients are not supported.

Unless you bring your own license and create your own operating system image, a WorkSpace is Windows Server 2008 R2 with the Windows Desktop Experience. This is for licensing reasons, since Microsoft has stringent limitations around the use of Windows 7 in a virtual environment. Windows 7 is only available on Microsoft's own Azure cloud for test and development. In order to bring your own license, you need a Microsoft Volume Licensing agreement with Software Assurance.

Amazon has done a good job in configuring Server 2008 R2 as if it were Windows 7; after all, the core operating system is the same. In addition, Amazon told The Reg that "each WorkSpace is a full Windows VM," so there is no multi-user trickery going on under the covers.

WorkSpaces ties in with several other AWS services. You can integrate with on-premises Active Directory via Amazon's Virtual Private Cloud combined with a VPN connection. There is also a WorkDocs Sync client which lets the user synchronize documents across two or more computers, including their WorkSpace. WorkDocs, once called Zocalo, is a document storage and collaboration service.

Over the two years since WorkSpaces launched, Amazon has added several features, notably:

Next page: Hands-on with WorkSpaces
Page:
Tips and corrections
43 Comments

And if you turn to your left, you can see the walls of Amazon Web Services' vast server farm. And next to it, a gift shop and visitor center