Here's a great idea: Let's make a gun that looks like a mobile phone 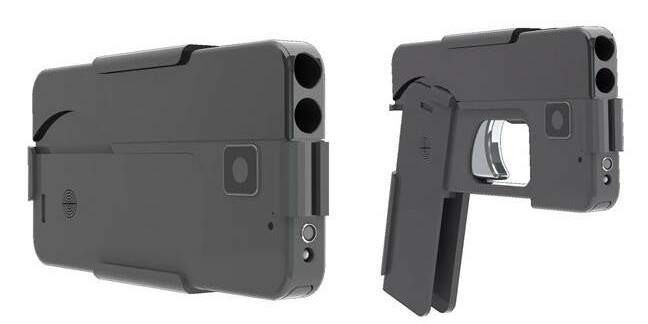 Absolutely no one can make sense of the United States' infatuation with firearms.

But that dichotomy between both arguing for extraordinary rights to carry guns and worrying intensely about being attacked by guns has rarely been as stark as the news that someone has developed a gun that looks like a mobile phone.

In a country that has seen countless people shot and killed for carrying all manner of not-guns because people thought that they were guns, it seems only logical to develop a product that can cause people to fear literally everyone that they see all the time.

The genius that came up with this idea is one Kirk Kjellberg from Minnesota. He was "inspired" by the fear of a small child in a restaurant.

Kjellberg was carrying his own gun-looking gun when a seven-year-old noticed it and ran off to tell his mom.

"He saw me, and said, 'Mommy, Mommy, that guy's got a gun,' and the whole restaurant, of course, turns and stares at you, and I thought there's just got to be something better to do than this," Kjellberg retells.

Of course that "better thing" wasn't to not actually carry a gun around in public, but rather to figure out a way to have a gun but not clue people into the fact.

"It's more so for people that want to be able to carry a gun when they need to and not have to engage other people about why they're carrying that gun," Kjellberg told the local KARE news channel, presumably to looks of uncomprehending horror.

The "Ideal Conceal" gun looks like a mobile phone and has the trigger closed up against the body of the gun itself. It can then be pulled down to provide double-barrelled .380 relief to anyone troubled by the concept of not having a gun on their person every second of the day.

Its body is made of plastic with a metal mechanism at the heart of it. If there's any good news it's that it doesn't actually exist yet, although according to Kjellberg it will be available in October for a very reasonable $395 and he already has 4,000 orders for it through his website. Tagline: "Because the right of self-defense is the first law of nature."

It's just that kind of small business entrepreneurship that made America great. ®

After all, what could possibly go wrong, apart from everything?

Vid What's that? They found 20 weapons and the landlord was linked to a truck bomb assassination? Oh sheeeeet

Comment Gov.UK to ask social networks to do their part...

Vulnerable kit can immobilise motors and even unlock doors