Photons as building blocks for AND, OR, XOR and NOT

Quantum research boffins in Australia have demonstrated one of computing's universal gates, the Fredkin gate, operating with qubits instead of bits.

The Fredkin gate – described here at Wikipedia – is a reversible three-bit gate that can be used to construct AND, OR, XOR and NOT functions. If the first of the three bits is a 1, the last two bits are swapped (0 to 1, or 1 to 0); if the first bit is a zero, they're not (also called a controlled SWAP function).

In the experiment conducted by researchers from Australia's Griffith University and University of Queensland, the gate swaps the quantum states of two qubits, based on the value of the control.

It's the universality of the Fredkin gate that makes it attractive to quantum computing researchers, as a building block to other operations.

As they note in their open-access paper at Science Advances, the Fredkin gate is useful to quantum computing, error correction, cryptography and measurement. 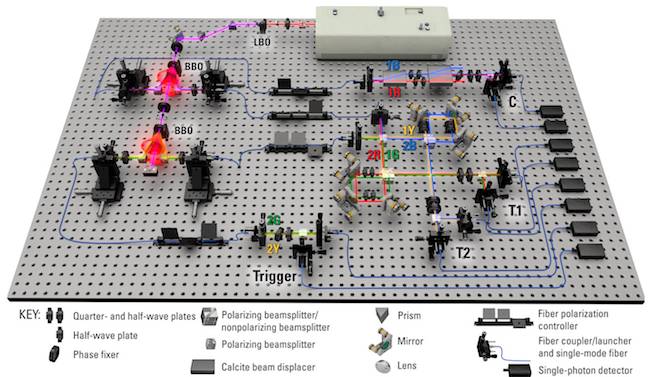 In quantum cryptography, for example, direct comparison of two sets of qubits is useful for verifying that two digital signatures are the same.

The boffins say they've creates the gate with fewer resources than previous experiments: instead of five logic operations to create a circuit, they used photon entanglement to “implement the controlled-SWAP operation directly”. It's also a high-fidelity quantum operation: because previous attempts needed to concatenate “multiple probabilistic gates”, which reduced the success rate.

As Dr Raj Patel of Griffith's Centre for Quantum Dynamics says in the university's press release: ”Similar to building a huge wall out lots of small bricks, large quantum circuits require very many logic gates to function. However, if larger bricks are used the same wall could be built with far fewer bricks.

“We demonstrate in our experiment how one can build larger quantum circuits in a more direct way without using small logic gates.” ®