Canadian think-tank CIGI (the Centre for International Governance and Innovation) reckons ordinary citizens are more comfortable with government oversight of the Internet and their privacy than, for example, Apple.

Dark net hostility is greatest in Indonesia, India and Mexico (all above 80 per cent saying it should be eliminated), with the US and Australia tied at 72 per cent.

At the same time, an average of more than 26 per cent of users don't trust their governments at all over monitoring their communications without their knowledge (something not highlighted in either of the two CIGI-Ipsos media releases; The Register pulled out those numbers from the survey data.).

In among the scary depiction of the dark-web – “child abuse imagery, the purchase of illegal narcotics or planning an assassination”, for example – CIGI research fellow Eric Jardine concedes that “shuttering anonymity networks is not a viable long-term solution, as it will probably prove ineffective”.

The survey also demonstrates that most respondents don't understand that unbreakable encryption protects things like their online banking and shopping, as well as protecting criminals: 60 per cent of Americans and 63 per cent of the total sample reckon “companies should not develop technologies that protect law enforcement from accessing the content of a user's online data”.

What's perhaps more interesting is that South Korea, Germany, Hong Kong and Japan all recorded more than 40 per cent of respondents opposing national security agency access to their communications. 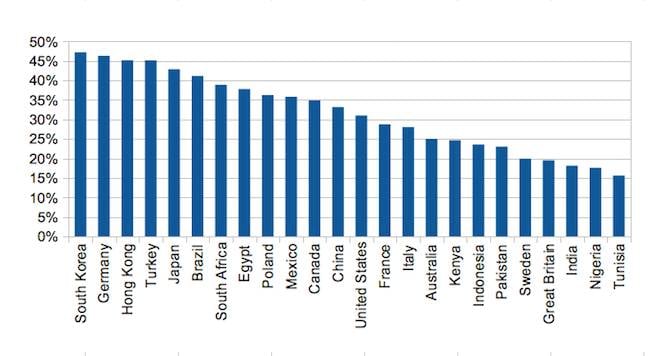 Citizens who don't want their governments snooping, by country

In other words, the survey doesn't only reflect citizens' attitudes to technology (or their understanding thereof): it can only be interpreted in light of the complex interactions that create a government's relationships with its citizens. ®