Pure Storage's coming high-end array: We have the details

More numbers come out from behind the kimono

We can tell you a few more juicy details about Pure's coming high-end array, and we're deducing that SolidFire has a product capacity refresh coming.

What we knew was that the new range-topper would boast up to 1.5PB usable capacity using 4 and 8TB 3D NAND modules (SSDs). It would have always-on QoS, support thousands of virtual machines and be priced at less than $1GB/usable capacity.

We saw an image of the new box and deduced 48 drive slots from that, implying 384TB using 8TB drives. That was wrong, as a Pure source tells us there are 20 more slots in the 3U base or head unit, with its two controllers, making 68 slots in total – 48 in 4 x 2U expansion shelves – and a nominal 68 x 8TB = 544TB raw capacity.

That's nominal, because 7.68TB 3D V-NAND TLC SSDs from Samsung were shown at the recent Pure Accelerate event, and that would make 522.24TB raw. A 2.9 data reduction factor would then get us to 1.5PB usable.

That means we can now add more detail to the Pure FlashArray product table:

The green column is for the new box; we've called the FlashArray//m90 but that's Pure (excuse the pun) guesswork. We're told that the new array will use the //m70 controller chassis, with the same NVRAM and the same number of IO slots. But a 4-port Fiber Channel is coming, which will double up the Fiber Channel ports.

The controllers will be updated and so the new system will go faster than the m70; the performance increment isn't known yet, so the IOPS and bandwidth numbers are guesswork and in italics to indicate that.

This new info means we can also update our chart of all-flash array raw capacities: 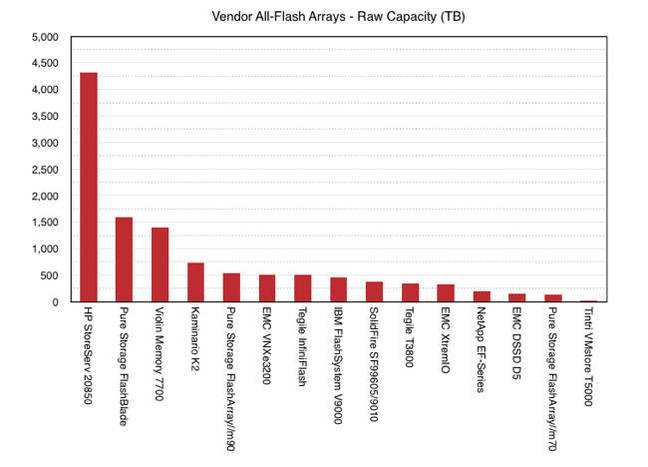 The new high-end FlashArray would put Pure in fifth position, behind Kaminario's K2.

A caveat here: our belief is that SolidFire is bound to increase its array capacity in fairly short order, by using higher-capacity SSDs. Currently the largest SSDs it uses are 960GB ones, and these are in the SF9605/9010 arrays it introduced in February last year.

If SolidFire went for the 7.68TB SSD, then a 10-slot unit's raw capacity would be 76.8TB, eight times more than the present one, and a 100-unit scale-out SF9605/9010 deployment would hold 7,680TB (7.68PB). Start bumping that up with data reduction techniques and the effective capacity would shoot up towards the 25PB level.

That would be a nice NetApp/SolidFire present for cloud service providers and equivalent enterprise customers in the summer. ®

Rising 3PAR dragged down by not so nimble Nimble