Hi! Up here! I'm your Amazon drone. Do you mind if I land now? 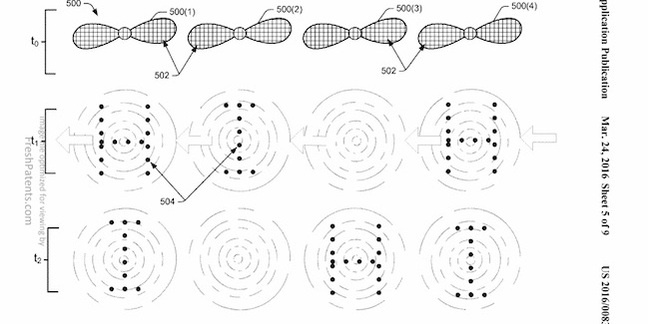 An image frim Amazon's patent: LEDs in a drone's rotors spelling out messages

The invention has two aspects, the first of which is the use of multiple propellors rotating in different directions to reduce noise. Amazon imagines one propellor rotating in one direction to provide lift. “While the second propeller may cause lift of the AAV,” the patent suggests, it “may also be operable to produce sound that cancels noise generated by the first propeller.”

The second aspect of the patent suggests using propellors to communicate with people on the ground, in two ways.

The first is using propellors to make sound. Here's the explanation:

Suppose, for instance, that the AAV were delivering an inventory item to a location. Upon approaching the location, the AAV determines (e.g., based on a video signal fed as an input parameter to the controller via a camera) that a person is situated at or near an intended or a suitable landing area corresponding to the delivery location. Such an input parameter may satisfy a flight condition corresponding to an audible communication, such as a “Watch out!” warning message. Accordingly, the controller may determine and cause to implement modulations of the rotational speed of a propeller, thereby causing the propeller to produce a series of sounds that are audibly perceptible as “Watch out!”

A second method would see the drones figure out they need to alert humans to their presence. In such cases “light sources [e.g., light-emitting diodes (LEDs)] coupled to one or multiple propellers may be caused to intermittently emit light in a synchronized manner while the propellers are rotating to generate patterns that are visibly perceptible as 'HELLO'.”

Noise is major issue for the aviation industry: airport operators and aircraft manufacturers alike want planes to be as quiet as possible, so as not to get nearby residents grumpy. Amazon clearly gets this is researching ways to make its drones as quiet as can be.

The company also seems to understand that drones landing on one's lawn may be rather confronting, so visual warning messages on approach seem a sound idea. But propellors simulating speech? That's a weird one. ®