Who exactly decides who sits on the Internet Governance Forum's main body? 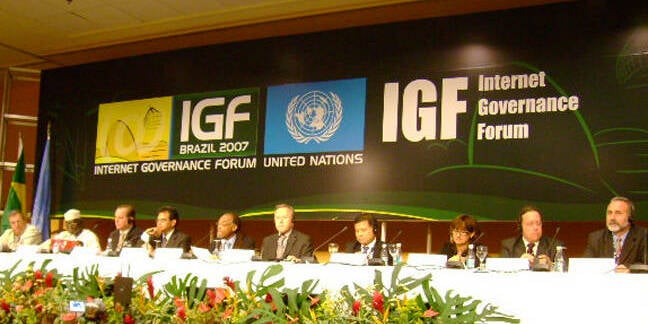 One of the sessions at the 2007 IGF meeting. (Photo: Wikimedia)

The United Nations body that reviews how the internet is governed is facing criticism from some of its biggest supporters over its "black box" decision making.

The Internet Governance Forum (IGF) is an annual event that pulls everyone from governments to civil society to business and the technical community together to discuss critical issues of internet governance.

It regularly attracts leading figures from across the world and the UN Secretary-General recently renewed its mandate for 10 years.

However, the forum's first planning meeting in Geneva next week may prove controversial, after most of the individuals put forward by different constituent groups to represent them were not chosen by unnamed UN bureaucrats.

Their slots on the "multistakeholder advisory group" (MAG), which decides the content and substance of the forum, were filled instead with individuals identified through a parallel process run by the UN itself.

Of the 55 MAG members, 21 are new but only eight were officially selected by their respective groups.

Moreover, existing MAG members were surprised when earlier this month a new chair of their group was named by the UN Secretary General, again without any indication of the process that was followed or why they were chosen.

The top-down decision-making has left some groups fuming and dredged up long-standing concerns over the forum's transparency and accountability.

We spoke with seven former and current members of the MAG as well as others with knowledge of the inner workings of the IGF and the UN in order to figure out what had gone wrong. All were happy to talk, but only on the condition of anonymity – a reflection of how politically charged the organization has become.

What we found were striking examples of miscommunication, poor planning, intransigence and a level of politicking over pragmatism that is all too common within the UN – and the nascent internet governance world – but which continue to defeat the very goals that the group sets for itself.

Not what it seems

Only a few months ago, the IGF was being held up as a shining example of the "multistakeholder model," where all groups have an equal say in decisions. Its place in the UN pantheon of semi-autonomous groups was all but assured when its mandate was extended a second time – this time for 10 years.

But the reality, one MAG member told us, is that the image of the IGF as a multistakeholder organization is little more than a façade, with all the important decisions made by unnamed individuals within the UN headquarters, referred to inside the IGF as simply "New York."

The IGF and its secretariat are based in the UN's offices in Geneva, but the IGF itself is a "project" under the jurisdiction of the Department of Economic and Social Affairs (DESA) at UN headquarters in New York.

In their place, a range of other individuals – some of whom had put themselves forward for consideration through their respective communities but were not chosen – have been given three-year terms on the advisory body (in actuality a one-year term with an automatic two-year extension).

"The selection process is a disaster," an existing MAG member told us.

The same is true for the selection of the new chair – former Internet Society CEO Lynn St Amour. Many had expected the previous chair – a highly respected Latvian diplomat – to continue on in the role. But perhaps more surprising than the switch itself was the fact that the decision was made without any form of public process.

That is entirely out of keeping for a body that is supposed to represent the future of decision-making, another MAG member complained.

The UN itself just announced that candidates for the next Secretary-General will have to present their agendas at a number of open and informal debates before votes are taken on who it should be. It's a move intended to make the selection process more transparent and unbiased. But there was no vote, or even a presented shortlist of candidates, for the MAG chair, not even within the MAG.

This "black box" nature of decisions has become a lightning rod for other concerns with how the IGF is run.

Next page: Where and when
Page:
Tips and corrections
9 Comments

Calls for counter-narratives and collaboration plan with tech giants

Bad Vlad won't care, but this puts voting infrastructure on par with DNS and BGP

If it's not a 50in TV or a huge fridge of soylent, we don't want to know